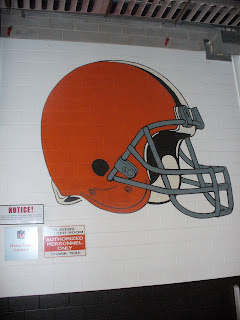 Are you ready for some football? I know I am, so to get myself fired up, I went to the Browns Stadium for a little tour. It wasn't until this summer that I realized that most of the sports teams have tours that they will give for a small fee. So, on a recent drive by visit to Cleveland, I went on a tour of Browns Stadium and Progressive Field.
The tours were as different as the franchises. For the Indians tour, there was a decent crowd, it was incredibly organized and informative. The Indians has a whole crew that does nothing but give tours.
The Browns on the other hand, have a staff member (he just graduated college) take me around. I was the only one on the tour and it was more of him walking me around and warning me to look out for midges and spiderwebs (advice I was incredibly thankful for). 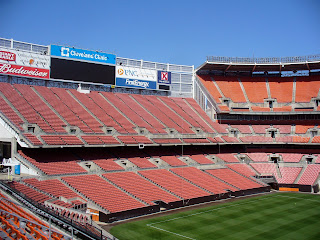 The tour started in the Grille area and we walked through the dark stadium to the press box. It was a great view and would have been fantastic to go outside but there were swarms of midges and they looked pretty healthy, so we just looked out the window. 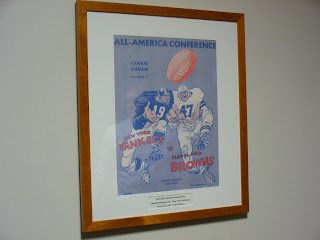 All along the hallways of the club area and the press area there were great programs of the past framed. This one was of the Browns v. the New York Yankees. 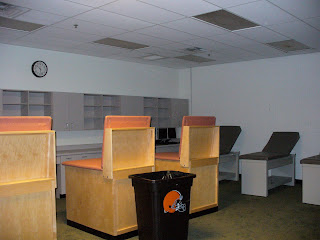 The team's actual training and locker rooms were off limits, but this was the training room for the visitors. It seemed very small to me. The staffer made a point to tell me that when the other team arrives, this is what the room looks like. The other team is expected to bring their own supplies. It was a big change from the Indians, where the other team arrives to a stocked facility. 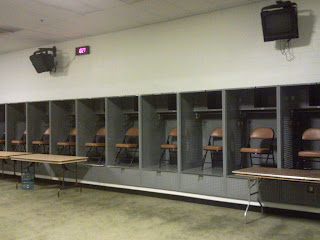 The visiting locker room looked sparse to me. I don't know what I expected, but I thought there would be more. Again, big difference from the Indians, which had cushy leather chairs. At this point the staffer was relieved that I didn't want to see the bathrooms. It seems for some reason people want to see the urinals. No thank you. 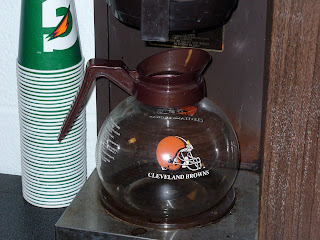 You won't find this in the Steelers' locker room. 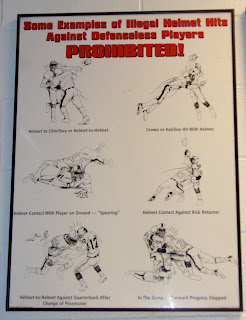 There were several posters like this around the locker rooms. It didn't seem very eye-catching and looked more like something you would see in a middle school gym. 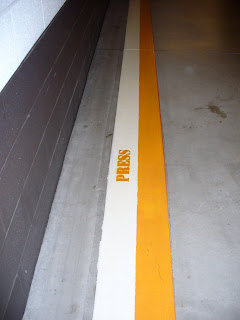 All along the concrete in the bowels of the stadium, there are color coded lines. Sort of like the hospital. Press, follow the while line please. 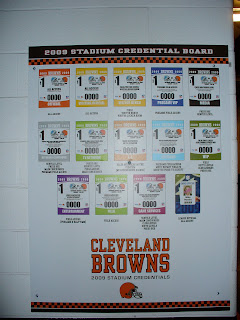 The game credentials for last season. The funny thing about these, is no one really looks at them unless you are on the field. I work in another NFL stadium, and no one looks for passes unless you try to get into the locker room or on the field. Black pants and a white shirt will get you just about anywhere. 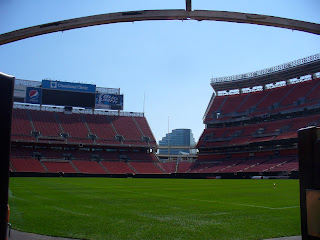 This is the view of the players when they come out of the tunnel. Very cool. 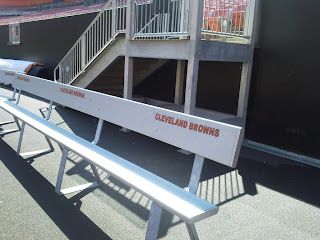 We ran down the stairs to the field to escape the midge swarm, dodging giant spider webs along the way. At one point, the Browns staffer was incredibly chivalrous and knocked down spider webs for me. 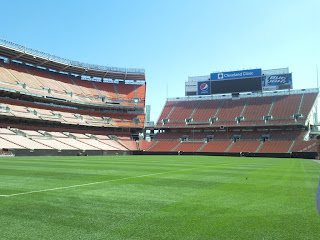 Like other places, we could walk around the field but there was a no touching/no stepping rule in effect. The day would have been perfect if the midges weren't swarming and all over the place.
The tours are on a call and reserve basis. There are no set times, it is more when the staff has time to walk you around. They were very cool with all my picture taking and question asking.
Unlike the Indian's tour, which had a set script that the guides followed, this was more casual and felt like a friend was doing me a favor and showing me around. Definitely a great way to spend 5 bucks.
Posted by Cleveland Chick at 9:49 PM