I recently made it back to Cleveland and I tried my very best to be a tourist and do the touristy things that I have always wanted to do. One of the many things that I did was take a tour of Progressive Field, home of the Cleveland Indians.


So sit back and enjoy my commentary and loads of pictures.


I have always wanted to tour the Indians' ballpark. For some reason I always missed it. 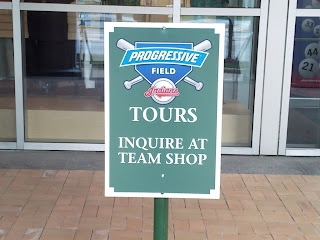 I arrived a little early for the tour and went through the Team Shop, buying a couple of ball caps and a spring training mug.


The tour left exactly on time, so if you are going by all means do not be late. 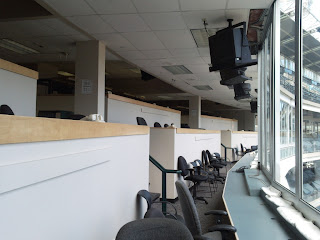 First stop was the broadcast booth. It is the largest in major league baseball. The windows all slide open and our guide told us that many times a ball will fly through and since writers are not athletes, most of them duck under the tables. And then chase after the ball. The tour guide was amazing, talking about the history of the franchise and the stadiums. 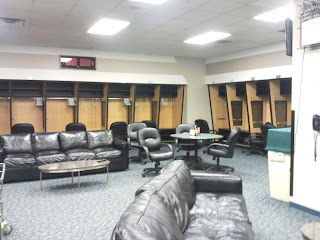 There was something going on at the park, so we were not able to go into Heritage Park. As a consolation prize, we were able to go into the visiting locker room. This is not a regular part of the tour. It was a stark difference between the Indians away locker room and the Browns away room (that will be another post). The Indians' room for the opposing team was comfy and luxurious, for a locker room anyway.  The area is assigned, with the players in numerical order going around the room. Except if a player is superstitious or if the pitcher and catcher want to be next to each other (that is a common request). Jim Thome always likes to be in the corner. 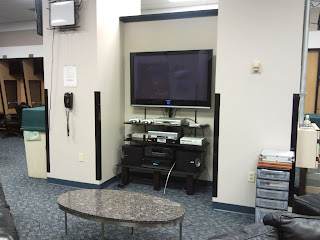 There are TVs, Golden Tee and video games everywhere. We were told that there is something like 1000 movies available to watch. With all of the game systems shown in the picture, the most popular with players is old school Nintendo. 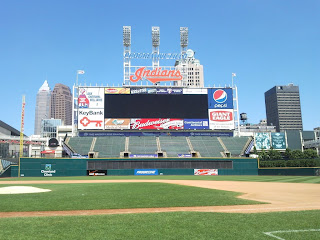 Finally, we hit what I was waiting for. The chance to go on to the field.  The guide was very clear in that we were not allowed on the grass or to even touch it. I obeyed. The warning track that we walked on was very springy and bouncy to walk on. It helps with drainage but can be incredibly slick when wet. So remember that if you are down there. 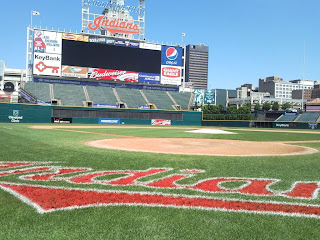 Standing behind home plate was a great feeling. The sun was shining, the sky was blue, there wasn't a midge in sight. 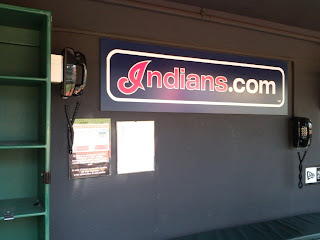 The Indians Dugout. Walking down into it, you see the bat boxes, the shelves for the helmets, the phone used to make "the call." 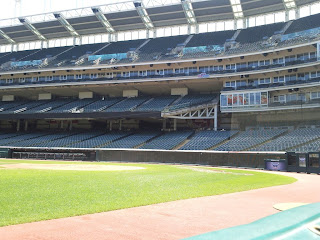 Inside the Dugout, there is a small ledge next to the fence. I climb up onto and tried to hang over the railing like the players do. Too bad I didn't have any bubble gum. 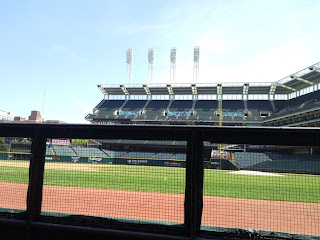 Then I took a seat. A great view for the game. 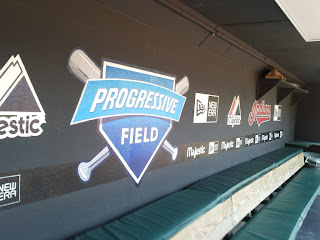 I don't know what I expected, but the Dugout isn't very glamorous. The Indians' and the away Dugout looks the same. 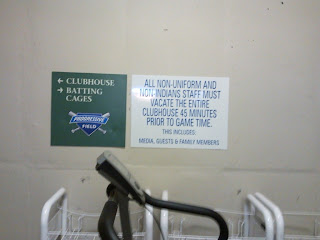 Right off of the Dugout, the Indians have their batting cages. There are 6 cages or so down here. Several are set up for live pitchers to throw balls. This area is actually computerized and from a terminal the pitching coach can send a series of pitches to the batter. 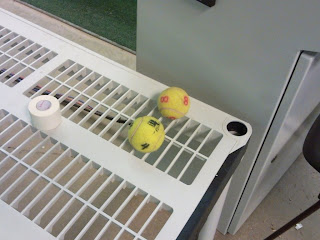 These numbered tennis balls may be one of the most interesting things on the tour. One of the coaches will put these in a pitching machine and chuck them at a player at a game speed, maybe 100 mph (although the machine can pitch as fast as 140 mph). The batter doesn't have to hit the ball. He has to be able to read back the number and color of the number as it whizzes by. 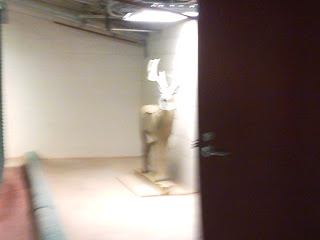 Ok, this picture is incredibly fuzzy. But it was behind one of the batting cages. The guide laughed and said she wasn't entirely sure what they did with the deer. I can only imagine. She shared that a lot of the guys are hunters or they like to fish. 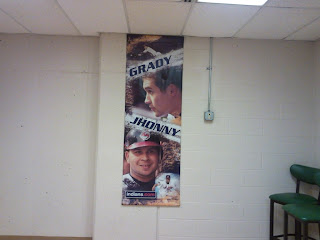 The entryway for the elevators going from the batting cages back up were decked out with this Grady/Jhonny banner. There were 4 or 5 of them hanging, so I have to assume it is some inside joke.

The tour ended after about an hour. It was well worth the $7.50 and proceeds for the tours go to Cleveland Indians Charities. The guide was incredibly knowledgeable on all things Indians and really seemed to have a love for the team and organization.

Posted by Cleveland Chick at 9:13 PM