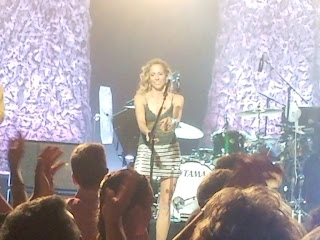 There are a few artists that I will always see whenever they are in town, whether they have a great album or a crappy one. Sheryl Crow falls into that category. I first saw her in the early 90s and well, 15 years later, I am still a fan.

I love Sheryl's music and lyrics and the fact that she is a true musician. Remember back in the day when you went to a concert and there was no lip synching? You went horse screaming for an encore, your lighter held high, until it burnt your finger. That is what her show is like.

Now I admit, some of her shows are better than others. But in Cleveland (with the crowd barking for an encore) she really seemed to enjoy herself.  Laughing and joking and getting into the music and the crowd. I could see all of this because as I have gotten older, I have added a new rule. For my favorite acts, I want tickets in the first 10 rows. It isn't about just being in the building anymore. Now I want to see and hear everything. 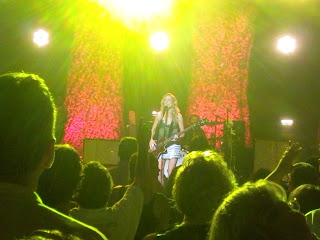 The other thing that I love about Sheryl Crow is that she's cool. Allow me to explain.

It what seems like a lifetime ago, I worked at an outdoor amphitheatre. Beer and hot dogs sort of thing. And over the years, I had a variety of passing run ins with celebrity types. Some were nice, some, not so much.

It was Lilith Fair and it was raining. I was tired and my socks were wet and the Dixie Chicks and Sarah McLachlan almost ran me over in their golf cart. To say that I was cranky would be an understatement.

The beer guys thought it was hilarious - and that I had lost my mind. And then she came closer. Yup, it was Sheryl.

I tried to be cool and look away, like seeing a rock star was a normal occurrence. But then she came even closer. It was a good thing that I had peed earlier because she was coming right towards me. Then it hit me, for a brief moment, I thought that she was going to make me clean up after her dog. I can say in all honesty I would have been ticked if she made me clean up after her dog. Bitter even. Okay, okay, bitter a lot.

As Sheryl got a few feet from me, I panicked. She asked me for one of the cups that I had to clean up after her own dog. Whew. I of course turn into a babbling idiot, "Hey, ummm...yeah, I can get you as many of those cups as you want." It was a true face palm moment. Sheryl was nice enough, took her cup, cleaned up after her dog and got ready for her show.

I tried to redeem myself in Cleveland, waiting to see Sheryl after the show, but all I saw was her walking briskly to her bus, iPad in hand. Oh well, maybe next time. 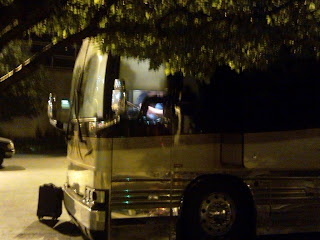 Posted by Cleveland Chick at 10:23 PM