As each day goes by, I realize that there is no other place like it. Actually Cleveland is like family. Specifically, it is like my cousin that thinks she is a Klingon. Yes, she does, but that is for another time.

I can say all sorts of things about my Klingon cousin, but I assure you, if you say the same, you had better prepare to defend yourself.

Cleveland sports teams are a part of the city's identity, like it or not. The teams create a community, even if it is to console one another after yet another soul crushing defeat.  We whine and cry and cuss and cheer and shout and cuss about our teams. But, they are our teams.

We can say they could get annihilated by the t-ball team. You can not.

The young man that wore a LeBron James Miami Heat jersey to the Indians game tonight is in a word, mindboggling. I'm quite sure he was pumped full of youthful bravado with a dash of stupidity when he marched to his seat in the bleachers. He thought, maybe like his hero, that he can do whatever he wants with out consequence. By accounts, he and his girlfriend were yelled at and taunted all night, until things escalated to the couple being escorted out by police. I'm sure that his girlfriend had a few choice words with him on the ride home.

Call it a mob, or call it fans that are tired of being ridiculed and abused. Please don't mistake me, I am not condoning violence and I certainly don't want to see anyone hurt. But, the situation was like the drunk guy that hops the fence at the zoo to snuggle with the pretty kitties, only to have a lion use him for a chew toy.

We all have choices, and there are consequences to those choices. We covered for LeBron and his boorish behavior for years. Now? Now maybe we need to rethink Papa Johns. We owe them some pizza. 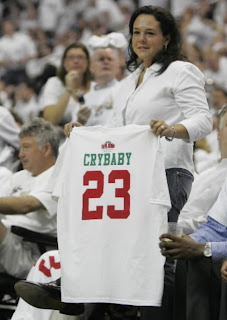 Posted by Cleveland Chick at 11:44 PM