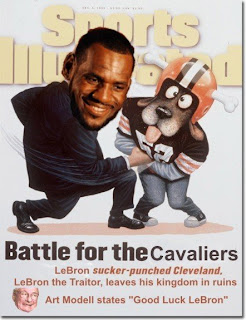 By now, everyone knows LeBron James has taken his talent and left Cleveland for fun in the sun in Miami.

His departure has sent me through a wide range of emotions; disbelief, sadness, anger, disappointment, you name it. Well, any emotion that doesn't convey happiness.

This was about more than basketball. More than sports. This felt personal.

Akron was LeBron's home. He grew up there. He grew up around Cleveland sports and he had to see the heartbreak of The Drive, The Fumble...for crying out loud...The Shot. Granted, it was with his Yankees cap and Cowboys sweatshirt, but he had to see it. So to call last night's infomercial, The Decision is mind boggling.

I can hear the conversation now...

LeBron:     "Hey, this is going to be HUGE and since I am the King, we need to give this thing a name"

Posse #1:    "Well, everything that was big in Cleveland sports has a name. THE Shot, THE Drive"

LeBron:     "Now we're on to something! THE DECISION" *holds his arms out like the now famous Nike pose*

LeBron:    "I can't wait to see the parade I get in Cleveland. They worship me"

According to the Cavs, LeBron personally didn't call to say he would not return. He said he gave his heart and soul to Cleveland for 7 years, but he still couldn't be an adult - a man - and call the team?

I honestly don't think that LeBron thought that the city would do anything but support him and run out and buy his Heat jersey.

The ESPN commercial was the start of LeBron trying to start over and  expand his brand, launching a website, twitter, etc. But paying for the questions asked? Sending all the fees to the Big Brothers/Big Sisters? That is great, but what would have been impressive is if he would have matched it. Parading a bunch of kids in to the announcement was hollow and insincere.

It's hard explaining to someone not from Cleveland how hard of a punch to the gut LeBron's infomercial was. We supported him in ways that no other city will. I would tear up watching Nike commercials, with the entire city rallying behind him and the Cavs.

It infuriates me that he watched the city beg, yes beg him to stay. Fans gathered in the hundreds to an appreciate day that he could barely be bothered with to attend. Fans lining the street cheering and holding up signs with words like "Home" and "Loyalty" hoping to impress the King.

LeBron was adored by the cities of Cleveland and Akron because he was one of us. Sadly, we found out too late that we were not one of him. 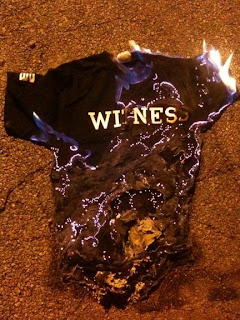 Posted by Cleveland Chick at 6:41 PM