Confessions of a Job Hopping Transplant 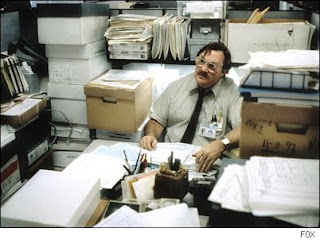 I always tell myself that I am going to write a book some day chronicling my adventures in the wonderful world of work. I know I'm on to something because whenever I tell stories about work or my co-workers, people stare at me wide-eyed and say, "No way...you have to be making that up." Over the years, I have gone with the canned response of "How could I possibly make something like (insert random ridiculous situation)?"

The jobs would be broken out into sections. The Cube Farm. The Bar. The Restaurant. The Mall. The Office would look like the ideal workplace by the time I was through. As I think about it, there maybe a book for each section. And of course there would be the section for the Boss in all of his or her forms, both good and dreadful.

Maybe once a week I will post a random story, something that would highlight the reasons I'm on the hunt for something new...or the winning powerball.

There was a time that I was a manager for a clothing store that is in every mall across America. Which for the record, the pay was decent and the best health insurance I have ever had. With most clothing stores, you need to wear what is in the store. It makes perfect sense. You can't wear Levis if you don't sell them in the store. Corporate came in one day and decided that the location needed a general manager. To call the GM that was brought in bumbling would be offensive to bees. The number one priority for the GM was to make sure OMG THE BAFFROOM IS CLEAN! The fact that there was internal theft meant nothing. Overtime? Who cares. Well, I did because it was awesome the amount of extra cash I was getting, but for the company that was a major no no. Customers were never allowed to use the bathroom since there was one right outside of the store and that was one more place for the thieves to stuff clothing down their pants in private.

The GM came in to the store in the morning and was gone around 4. Monday through Friday and weekends off.  In the retail world, that is a fantastically unheard of schedule. It was like a unicorn playing in a rainbow. GM would post the schedule, with a row of boxes for each staff member listing where they were. If they were OFF, VAC, SICK, PER...you get the point. At that time, I had the joyous task of payroll. Hunting down people that forgot to clock in or out. Trying to figure out if someone took vacation, that sort of thing. I was working on the payroll for 3 stores, so I relied heavily on GM's painfully specific schedule.

GM had been out for a week on VAC as listed on our schedule. So, I dutifully completed payroll and went about my business. Until paychecks came out. I was home enjoying my day off when I received a call from GM. I was told that I was lucky I wasn't in the store because he was going to "punch me square in the head." It turns out GM didn't have any vacation time but had worked some deal with the District Manager. But of course, I didn't know that and now I was being screamed at and, this is even more ridiculous, GM wanted me to give my paycheck to him, to make up for it. The DM called me at home to tell me I had to call corporate and tell them that I made a mistake...that the GM was in the store and working for that week.

I called corporate all right. I called to tell them that I was about to get bopped on the head like little bunny foo foo. I left that position shortly after calling the corporate squealer line. Nothing changed and my brain was turning into marshmellow fluff.

I am still searching for the perfect job, or at least one that doesn't make me look over my shoulder to look out for getting smacked up side of my head. But if I find the winner powerball first, that would work too.

Posted by Cleveland Chick at 1:31 AM