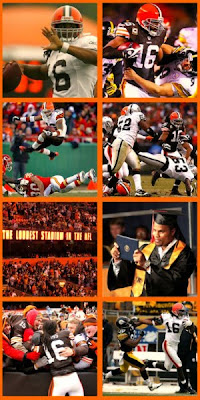 Josh Cribbs turns me into a little fan girl. And I'm not the only one.
Being a Cleveland fan is tough. Being a Browns fan is heartburn inducing. For the past 10 years or so I have lived in Indianapolis. Peyton Manning country. Superbowl Champions. I work at Lucas Oil Stadium on Colts game day, proudly wearing my Browns winter hat. Walking on the field level, winding through the cement tunnels, I had to deal with new media of all types, from the locals to the NFL network guys. Each giving me the business for my team. My response?

WOOF!
Yes, I barked at the NFL Network. I barked at the local news media. After a couple of seasons, they look for me now to update me on the Browns score as we stand outside the Colts locker room.
Every Sunday, I toss on my Browns jersey and sit in a sports bar, usually the only Browns fan in the place. In the early years, I was usually stuck in some corner, one tiny screen with the Browns in a sea of big screen high def televisions.
There have been a few moments when the bar will all turn to me...the Browns v. Ravens game a few years back with the amazing Phil Dawson kick. It was nice to have people root for me. But more importantly cheer for the Browns.
And then there is Josh Cribbs.
In the last few years, there has been more drama than Erica Kane and all her children with the Browns. Whether it was bad attitudes, staph infections or losing records, it's been tough.  There were two players you could count on...Phil Dawson the kicker and Josh Cribbs the all around.
This guy from Kent State that went undrafted set a franchise record his first year as a kick returner. Last year I went to Cleveland to a Monsters game because Josh was going to be there signing autographs. He was the nicest guy. He took the time to sign autographs for longer than he was expected to and was fantastic with fans with picture taking.
In the recent era of Cleveland players leaving town - running away and never looking back, Josh has stayed. After the dramatic decision of LeWhoShallNotBeNamed, it is refreshing to see a Cleveland athlete that loves the city and loves the fans. An athlete that understands the connection the city has to the team and to him. 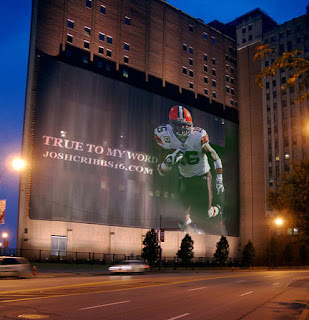 Posted by Cleveland Chick at 11:35 PM