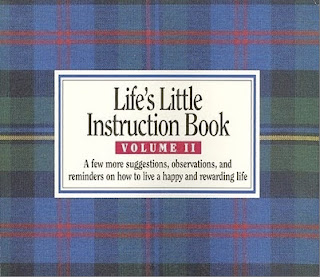 When I was in college and through my career in higher education, I was obsessed with the whole "Life's Little Instruction Book" phase. Little nuggets of wisdom that made you go "duh" or "hey, that is a great idea." Students used to fight over who would have the privilege of posting a quote for the week on my board. They would scour my quote books, trying to find the perfect one.

"Don't rain on other people's parades."

"Don't ever watch hot dogs or sausage being made" was always a popular one.

There was one about rooting for your team to win and not for the other team to lose. A nice little lesson on good sportsmanship. That one got me into a little trouble with Star Jones. Yes, *that* Star Jones.  Star was on The View barking about Reggie Miller and how her beloved Knicks were going to kill him and how she wanted him to lose. And not just lose the game. Star wanted Reggie and the Pacers to explode in a splintering fiery ball of doom.

For some reason I had visions of a higher moral authority and I sent Star an email that merely stated that she should root for her team to win, not for the Pacers to lose. I think her response was something on the order of "Suck it."

My other favorite quote was about starting a fan club for the catcher of your local baseball team.  Every now and then I would think about how much fun it would be to get a group of friends and make huge signs and posters for the catcher of the Zips baseball team.  Maybe even get t-shirts made. It made me think about how every player is important. Each may not get the glory or headlines, but you certainly can't play baseball without a catcher. The same as you can't play football without a kicker.

I love to watch Phil Dawson, because he is a given. He goes in and does his job. He is the clutch player. The game is on the line and they send him in to make a career long kick. Phil just shrugs his shoulders and does it.

I met Phil at Training Camp a few years ago and he was a genuinely friendly and gracious guy. I was trying to fight my way to get his autograph with kids shouting at him "Hey! Who are you?" and when I made it to the rope line I asked "Hey Phil, would you please sign my football?"

Phil's response? He laughed. I think I was the only one in earshot that even knew who he was.

So, this season, I will proudly wear my Phil Dawson jersey, holding my own little fan club meeting to cheer the kicker on. 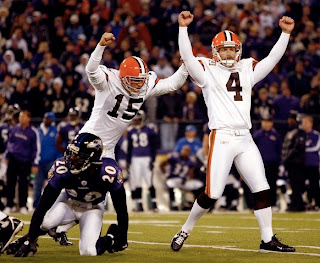 Posted by Cleveland Chick at 10:26 PM