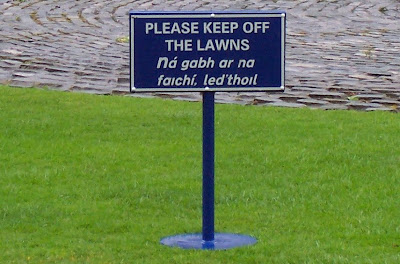 Over the years I have become a believer in signs. Not the song, and certainly not the movie. I'm not overly religious nor do I necessarily believe in some divine plan. I like to think I have choices.

Sometimes something will happen, someone will make a seemingly random comment that will later make perfect sense. Or maybe you tear out a magazine article only to find it months later, when you really need it. All like some blinking green arrow in the distance, not entirely sure it is really there, but maybe...

Maybe it is. Or maybe you need to take a nap.

I remember sitting in a sportsbook to watch the Kentucky Derby and this random guy sat next to me. We nodded at each other and got back to watching the races. After a few minutes he gets up to leave and as he takes the last swig of his beer he said, "You know, if I had to bet on one horse today, it would be Giacomo. Giacomo is the one. Bet on Giacomo." By the time I looked back to him, he was already gone. I had a choice. Do I assume that this was some sign, some clue and make the bet? Much to my irritation, I ignored him. Giacomo came in at 50-1. The second biggest upset in Derby history. It is a very safe assumption that words came out of my mouth that are completely inappropriate for my blog.

Several years ago, I had a trip planned to Ireland. Life was beginning to take some strange twists and turns and I should have stayed home. But, the trip was already planned and more importantly, paid for, so off I went. I further rationalized my trip by telling myself that I needed some time away. No one can reach me there. Very limited access to phone, email and internet, it was the peace and quiet I needed.

The weather was wet and dreary. Rain, snow, dark forboding clouds. It fit my mood.

Like every other tourist, I went to the Guinness Storehouse. It was my last day in Dublin and I had an enormous list of gifts to buy for people. Some were personal gifts and some were, "hey here is $20 get me something cool" gifts. I began wandering around the store, my arms filled with shirts, mouse pads, coasters, anything that had Guinness on it. A young man came behind me and in an Irish accent that was perfect for tv, he asked, "would you like some help?" I told him that I totally needed help and thanked him. His response was something that has stuck with me. He smiled and said, "Hope comes in unexpected places."

He helped me finish shopping and I stood in the long line and thought about what he said. What a strangely wonderful thing to say to someone. As I plopped my items on the counter I told the cashier that an extremely helpful young man assisted me and I wanted to thank him.  The woman looked at me, giving me that "I think you are slightly crazy and have no idea what you are talking about look" and asked me to repeat what I just said. I explained that there was a guy on the floor that was very helpful and I wanted someone to know. I pointed to the piles of Guinness logo emblazoned stuff and explained that he had worked with me to pick everything out.

The clerk looked at me and just said there were no salesmen on the floor. In fact, there were a few people working on the floor at that time, but they were all women.

I chuckled and told her I must have been mistaken, knowing full well I wasn't. I took my shopping bags out of the massive store and decided to take a walk. I walked past the Guinness sign that all the tourists stop by, wandering down the cobblestone street. I ended up on the far side of the brewery and in the middle of the massive brick wall, out of sight of the visitors and guests, was the phrase "Stone upon stone upon fallen stone" in blue paint.

Stopping by to get a famous pint of the black stuff and a t-shirt evolved into a thoughtful introspective afternoon. Was anything that day a sign, or just some guy with a little extra time and a little extra paint?

Posted by Cleveland Chick at 9:53 PM