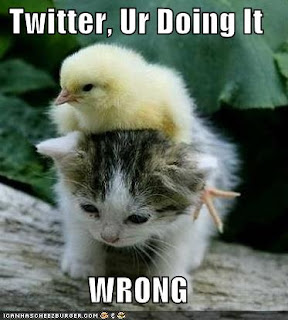 Twitter is a great way to have lots of conversations with lots of people. I follow, or am "friends" with a wide variety of people and companies. Some people only want to talk about sports, or tell jokes. Some want to share recipes or their company.

As with any technology, there are "experts" that have dissected every angle of Twitter. They have discovered the best things to tweet, how to get more followers and even the best time to tweet, or send out your message for the best response.

There is a group of social media experts that will tell you that you should send your message out several times a day, with the idea that not everyone is on at the same time. I personally hate that idea because I end up seeing the same person saying the same thing over and over. It makes me nuts.

And then the most horrifying thing happened.

I was at a winery with some friends and I wanted to share it with my followers. It was a beautiful afternoon, and it was a great time. I took a picture showing this tasty rhubarb wine and the vineyard in the background. We hung out there for awhile, and then went on to an engagement party. When I was at the winery, the reception was terrible and I couldn't log in to Twitter. By the time we made it back to the house, my phone was dead, and I figured it was just going to be a Twitter-free afternoon.

When I arrive home that evening I logged on and noticed I had a lot of messages. A LOT. I looked at my page and somehow Twitter had posted the same tweets somewhere around 30 times. I was horribly embarrassed.

In the Twitter world of high speed drive by conversations, I ended up losing about a dozen "friends" because of the glitch.  Maybe Twitter picked up that I was at the winery and it had a few too many glasses of vino.

Posted by Cleveland Chick at 2:01 PM