I recently read an article online about how when share something personal or embarrassing with others, it makes you more likable.  You're creating a connection with others that opens the door for more communication. So, it is in the spirit of good will and wanting more people to read my blog that I'm about to share with you this true tale of a nerdy fangirl.

In addition to my love of trashy reality tv, I enjoy smart progrmas. I love the Discovery and History Channels and documentaries of every sort. One of my all time favorite shows is CSI. The Vegas one of course. I love it as much, if not more than Fringe and the X-Files. It's that good.

One of the factors that draws me to CSI is the writing. At one point in my life, I had dreams of being a writer for tv or movies for just that type of show. With that in mind I can't watch a show unless the writing draws me into the lives of the characters. I'm such a CSI nerd that I even have favorite writers.

Now that you have a little background, let's flash forward (which was a good show by the way) to the season ending episode of CSI where Sara was trapped under a Mustang in the desert, left to die by the miniature killer. After the season finale, fans were losing their marbles. The hardcore ones any way. A main character left in such peril was incredibly frustrating but the miniature killer was such a fantastic story line. There was a group of fans that wanted to protest to CBS in fear that Sara would be left for dead or eaten by wolves. This was about the same time as the Jericho fans got their way with their whole nuts campaign.

My thought was to say thank you to the writers for such a great show. Not yell and scream and cry about how I wanted the story line to go. Just a little thank you for my favorite program that I love to watch and by doing so, it was possibly slowing my brain from rotting.
In a moment that can only be described as Lucy inspired, I called the Cookies By Design cookie place in Los Angeles and asked them to send the "Thanks a Buzzz-illion" cookie bouquet to the CSI writers with a little note that said "Thanks for a great season!"

I sent it off and didn't think another thing about it. And then I got a phone call. From Los Angeles. When they tried to deliver the cookies, there was a note on the door of the writer's area, written in Sharpie no less, that said, "No packages accepted" until such and such date. I panicked a bit until the cookie lady told me that they would redeliver the cookies two weeks later, when the office was open.

2 weeks go by and I get another phone call. From Los Angeles. The cookie delivery guy tried to deliver the cookies and was stopped at the gate because the cookies didn't have a pass. Being from the midwest, all I could think of in my confused state was some sort of hall pass attached to the cookies. The store said he would try again later.

A few hours later I get another phone call. From Los Angeles. The CBS security crew once again stopped the cookies. Maybe it was because of the Jericho nuts people again, but those cookies were not getting in there if that guard had a say in it. The cookie lady asked me for a name to attach to the cookies. I told her David Rambo (my favorite writer). She put me on hold and called the cookie delivery guy and gave him that name. No dice said the CBS Security team. It wasn't like some guy wandered in off of the street with a half eaten twinkie. These were beautiful, tasty cookies.

The cookie lady told me that everything would be solved if I would just call my friend David Rambo and he can make a pass for the cookies. That was the point I had to confess. With my voice breaking I said, "Ma'am, I'm just a fan of the show. I live in Indiana and I wanted to do something nice because I love CSI so much." I was sure that the cookie lady had a vision of me being like the 800 pound woman that never left her couch and her body began to fuse with it. Somehow, those were the magic words for her. Cookie lady chuckled and told me to hang on. After a few silent moments, she told me that they were going to slide the cookies with some other packages and try to sneak them in on those passes.

I thanked her for her help and kindness and then it hit me. I would never know if the writers received the cookies. In fact, I imagined a guard shift change and the new guard chuckling to himself while eating the cookies because the cookies had no pass. My heart sank. After all that, some guard was chomping on my cookies and chucking the rest in the trash. That thought gave me a new determination. The writers were going to know about the cookies and hopefully give the guard that was eating them a giant noogie.

Using my mighty google-fu, I found David Rambo's e-mail address and sent him a message telling him how awesome the writers are and a picture of the cookies that I had sent, telling him I hope they all enjoyed them. And then I went to bed. It was a trying day.

The next morning I trudged through my emails bleary eyed and there was one from David Rambo. I just stared at it...do I open it? Of course I do, but will he be happy and excited about the cookies or telling me to cease and desist? When I finally became brave and opened the message, I was ecstatic that David Rambo told me the staff did indeed receive the cookies and loved them. He also asked for my address because the writers wanted to send me something.

I thought maybe I would get some CBS notecard with a little thank you message. Which, by the way, would have been awesome. Everyday for a couple of weeks I would rush home to check my mail. Nothing. Then...one day I came home to find some huge envelope stuffed in my mailbox, hanging out over the top. My first thought was, "Huh, wonder what I ordered off of eBay." Then I saw the return address...CSI Writers.

The writers had signed a copy of the script from the season finale for me as a thank you for the cookies. I was so touched and impressed I didn't know what to do with myself. Over the years people have asked me if I would ever put it on eBay. My response is the same now as it was then. That script will hit eBay the same time as my Josh Cribbs/Phil Dawson signed Browns football and my Grady Sizemore baseball hits, which would be when I am dead.

There are lots of different types of fans. There are the casual observers. There are the over the tops, like my cousin who met her husband at a sci-fi convention when they were both dressed as Klingons. And there are those, like me, happily in the middle of fun and restraining order bound. 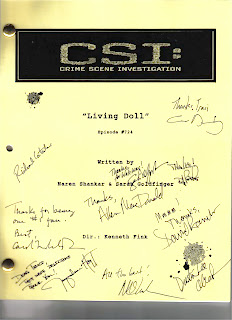 Posted by Cleveland Chick at 10:21 PM