No Cup For You! 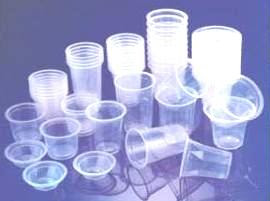 This is going to be one of those posts that will make perfect sense to some and others will be like whoa, I had no idea.
How many times have you gone to a concert, sporting event or even Mickey D's and asked for an extra cup only to be given a mumbled denial or a flat out no?  I remember many times as a kid watching my mom argue with the person behind the counter for a larger cup for water or a cup to split a soda. As much as she begged and pleaded and shared with the cashier how stupid their rule was, she never got anyone to budge. Well, at least the cashier never budged. Eventually a manager would either be incredibly rude or give her a cup because my mom had become the rude one.
Over the years, I came to understand the situation - the situation of cups, not the Situation of the Jersey Shore. That is a whole different post. Here's the deal...when you go out to one of these places that serve drinks in plastic cups, that cup is what is called a chargeable. That means there is a dollar value assigned to that cup. If you have 50 cups in front of you and each one is used for a $10 drink, you now have 500 bucks in front of you. If I am bartending and lose 10 of those cups and I don't account for them somehow (showing the boss man that they were cracked or otherwise unusable) I am short $100. Ouch.
If you think about it, the soda or beer you buy at a game or concert come out of boxes or kegs, so there is no real way to tell how many drinks were poured. There are contraptions that can weigh kegs and give estimates as to how much was used, but nothing is exact. As far as cocktails, you can look at a bottle and estimate how many shots were poured, but it is impossible to know for sure how many shots of Crown you used.
Now to make it all the more complicated, there are usually cups around (mostly for bottled beer) that are not chargeable, because you count the bottle of beer, not the cup. So, if you are not thoroughly confused yet, now think about all the cups. As a bartender at NFL games, I have cups for bottled beer, wine, shots, cocktails, 3 or 4 specialty cups, large sodas, small sodas and a partridge in a pear tree.
People at games will ask me for an extra cup to put their 2 cocktails in or 2 cups of wine. A totally reasonable request...one that I must deny. One would think that it would be simple. "I'm sorry sir, I can't give out extra cups." But like a game of Jenga, nothing is really ever as simple as it seems. Me denying someone their right to an additional cup pushes some people over the edge, through the valley and down the river. I have had people threaten, yell, scream, beg, plead and my personal favorite - steal the cups.
Yes, steal the cup. Let that sink in for a second.
Since this isn't my first rodeo, I flank my "expensive" cups with the "freebie" cups. If one of the freebies get stolen, no biggie. If the $10 cup gets yoinked, we now have a problem. Each week, I explain to the same people that I can not give them a cup. I apologize. I rationalize. I agree. If none of those tactics work, I tell people that truth. This year, we were given the smack down. If we are caught giving out cups, we can be fired on the spot. Adios. It amazes me that when I use that as my last card, that I will be fired if I give out cups, people still want them. People babble on about how I won't get caught or my personal favorite - I'll leave you a big tip.
Here is a little secret, if you tell a server or bartender that you are going to leave a big tip you are automatically categorized as a jerk. Actually, most bartenders will call you something other than a jerk, but jerk will work for here.
Ahem.
This Sunday, when I set up my bar and rows and rows of plastic cups, I'll search the crowd for the lady that always order 2 chardonnays at a time and plead for an extra cup, trying her best to see if this will be the day that she breaks me...and I give her an extra cup.
I won't.

Posted by Cleveland Chick at 11:03 PM