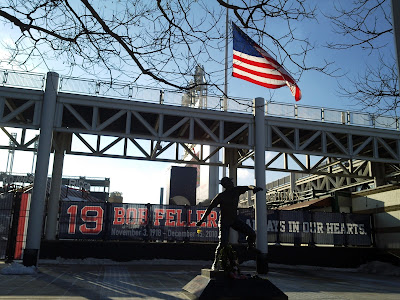 In the past days, everyone has shared these fantastic memories of chance encounters with the Cleveland Indians legend.  Almost every Cleveland fan has something signed by him (personally, I have a photo and a ball from Spring Training) in their collection.

Some people said he was gruff or grumpy. I say he was Cleveland.

As a graduate student at Iowa State University, the best part of those two years was an hour side trip that my dad and I made to Van Meter, Iowa to see the Bob Feller Museum. I'm sad to say that this was in the age before digital cameras. If you wanted pictures, you still had to use *shudder* film. Some of you may not remember these days, but you had to buy film, which was expensive and then process it, which was more expensive...and then, the HORROR *wait* for the pictures to be developed. The most difficult part of these days was the dreaded conversation that you would have to hold with people, "I'm sorry, but I only have one picture left, so would you please step aside?" But of course, there was always the joy of the extra picture or two on the roll. There were few greater joys of getting one over on Kodak than the 26 pictures on the film roll of 24.

If you have never been to Van Meter, it is nothing more than a blip on the highway. The city is under one square mile. Under. One. Square. Mile. If I remember correctly, there were four stop signs in town.  One on each corner.

When we got into town, I saw families hanging their wash from lines in the yards. Just this little neighborhood and then this red clay building that looked more out of place than anything I have ever seen before in my life.
The day we went was boiling hot. I thought we were lost. I distinctly remember the sound of my leg being ripped from the car seat when I got out. Never had I been to a city so small. Inside, the museum wasn't very large, but it was amazing to see. Personal artifacts of Bob's...his uniforms, his bats. It was there that I learned that it was on Feller's bat that Babe Ruth leaned on during his last public appearance at a sold out Yankee Stadium. 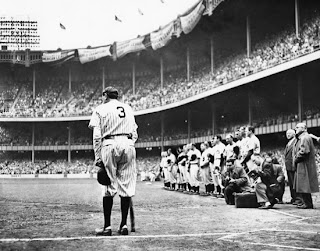 The visit reminded me of my childhood, going to museums of all sorts with my dad.  The fact that Feller left his fantastic career to serve his country and then...come back? Amazing. Imagine what would have happened if he didn't enlist and instead played baseball for those 4 years.

The last time I saw Bob Feller in person was the inaugural season of Spring Training in Goodyear, AZ. I happily paid $10 for him to autograph my Spring Training ball. My friends laughed and mocked that I paid for the autograph, but I was happy as can be.

Last year, Bob didn't make it to the park when I was in Arizona. I don't remember if it was due to his flight or if he was ill.

I just thought he would be there next year. 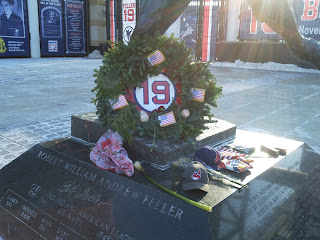 Posted by Cleveland Chick at 5:04 PM