The Browns v. Steelers Game or Why Away Fans Should Stay Away

I'm not a fan of the Pittsburgh Steelers.

I'm not a fan of Big Ben waving his little ben.

I'm not a fan of little yellow towels waving around, and yes, I'm still not a fan even though I know they were brought about for a good cause.  They are indeed terrible, like in the category of wet socks on your feet during a blizzard sort of terrible.

For anyone reading this that is not a fan of the Browns or the Steelers, you should know, they feel the same way about us. I had to go to Pittsburgh on business and it was like bizarro Cleveland.  On street corners there were card tables set up with t-shirts in black and gold, with the guys behind them hawking their wares. There were of course witty sayings on the shirts and the ever present cartoon Calvin peeing on a Browns helmet. Classy stuff. But, if you have been to a Browns game, you have noticed we do the same thing.

Anyway... as of late, I have been very fortunate.

If I were prone to breaking into song, I might gleefully dance down the street while singing something from Journey. My wish finally came true and I'm back home in Cleveland. Friends have taken pity on me and I have been showered in Cavs and Browns tickets (of course, it is helpful when the teams are a bit under the weather). I have been to more Browns games this season than the past 10 years combined.

The sky parted, angels sang and I was offered a chance to sit in the Dawg Pound...just a few rows up from the field. And these tickets weren't just for any game. No sir.  These tickets were for the Browns vs. Steelers match up. This is the one game that fans look forward to all season. Good (Cleveland) vs. Evil (Pittsburgh). For this game, there is usually absolutely nothing on the line for either team...only pride.

That weekend, I hustled back to Ohio (from Indiana where I have been trying to get my condo up and ready for the market) and made it in time for one last trip to the Muni Lot this season. It was cold, but the sun was shining and we were next to the Four Loko kids again, and it had the makings of a great day. I had met all sorts of awesome people throughout the morning, including my new friend that got me into the Dawg Pound, which we will call Mr. Awesome. It was cold as all get out, but I had hand warmers in my boots.

All in all, the makings of a good day. No, a great day.

The Steelers fans started to arrive.


*climbs up onto my handy ever present soapbox*
For many years, I have been a fan of the away team. I've followed my beloved Cleveland teams in Iowa, Tennessee and Indiana.  I once had to pay a large man that enjoyed lifting his shirt to scratch his equally large belly $50 to put on the Indians. The Indians in the World Series. In a sports bar. But it was the UT Bama game so I was the only one who cared about a little thing called the World Series. I ended up in a corner watching the game on an ittty bitty teeny weeny TV that kept fading in and out.

I have been a bartender at Indianapolis Colts games.  Think about that for a second. Try being a bartender for the Super Bowl champions ... as a Browns fan.

Whenever I watch a game, I am respectful and sometimes quiet, but I am always a Cleveland fan. I usually wear a jersey to watch a game, so there is no mistaking what team I'm rooting for. But I am respectful. When you are the away team, you are in someone else's house. You need to be mindful of that.that doesn't mean you don't support your team. That means that you behave and not act like a moron.

I'm going to just come out and say it. The Muni Lot is no place for opposing fans, especially Steelers fans. When pride is on the line and booze is flowing, as a fan, you need to be smart about things.

Before any feathers get ruffled, let's be honest and realistic here. If you are an away fan, an arch rival, you have no business on the home turf to tailgate.

You *will* be taunted with chants of "a**hole". You *will* be told to go home.If you are OK with that, to each his own I suppose.

As a Cleveland fan, I went to a Browns/Colts game in Indy. It isn't even any sort of rivalry and I *ahem* met my friends before the game at a sports bar. I didn't go to the Blue Crew hang out and mess with Colts fans.

Could I? Of course I could. I'm not afraid to go anywhere, but why would I go somewhere to purposely antagonize the other fans? That is just asking for trouble. It's like the guy who tried to hug a panda. Shocker, he got chomped.


*climbs down off of my ever present soapbox*
The day continued on, but with the tension between Browns fans and Steelers fans ramping up. Lots of louder taunting, yelling, the Four Loko kids burning a terrible towel. You get the picture. Some of it is good natured poking, some not so much.

Steelers/Browns fans parked next to us. A bit obnoxious all day, but whatever. One of the young ladies (and I will use that term loosely here) had a Ben jersey on. Personally, I don't understand how any self respecting woman would wear his jersey, but again, whatever. She was loud and obnoxious and as the day progressed, more and more angry. She didn't enjoy the taunting. A guy walked by and said, "Way to support your local rapist!" Umm...ouch. If you are going to wear Ben's jersey, you are going to get that. But then her response. I'm shaking my head as I type this. She yelled back, "Oh yeah? I would love to be raped by him!"

Whoa. How do you even respond to that? It was all I could do to just ignore her and her moronic comments the rest of the day.

Finally, it was time to go to the game. We marched over to the stadium barking and waving our signs and I got to sit in the Dawg Pound. It was amazing. It was like a little family. We were so close to the field, I had an ever present grin on my face, that is of course until about 5 minutes into the game.

The Browns were terrible. It was like watching the 8th grade team play the senior squad.

We ended up leaving before half time, unable to watch anymore of the thrashing, but I still loved the day. I met some great people, made new friends, got to sit in the Dawg Pound and once and for all see for myself what is so great about being a Browns fan.

Win or lose, I'm always a Browns fan. The best part is I'm not the only one.

As always...waiting until next year. Because it really is a rebuilding season. Really. Honest. 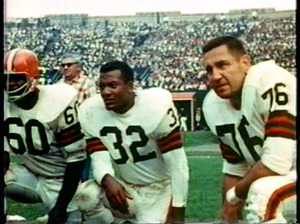 Posted by Cleveland Chick at 8:28 AM