I Demand My Chalupa

The Cavaliers are making it more difficult than usual to be a Cleveland fan. Their record is to the point that it is angrily comical.

If you are a Cleveland fan, it is difficult enough, with the constant Cleveland sports fail reel that is shown whenever we have a team half way decent. Yes, yes, we are a city desperate for a championship. But the Cavs are making me angry right now.

Yup. I said it. The team has thrown in the towel. I understand and realize that there are major players that are out. But it all goes back to that Heat game. LeBron got in their heads and they listened to him. The team isn't *this* bad. I don't believe that. When he was close to the bench, he said something. Something so awful no one will repeat it. But whatever it was, it stuck.

What bothers me most is that they believed him. LeBron James. That is the man they chose to believe. 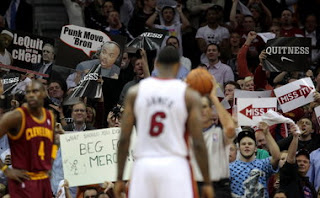 Please don't say that it's just a game. That will make my eyes pop out and the vein in my forehead explode. You can read my feelings on the topic here.

I demand change. I demand my chalupa.

I'm going to the game tonight and I am expecting a win.

We have to. The Cleveland fail reel has enough material already.

Posted by Cleveland Chick at 8:40 AM