The Streak Is Over, Let's Leave It At That 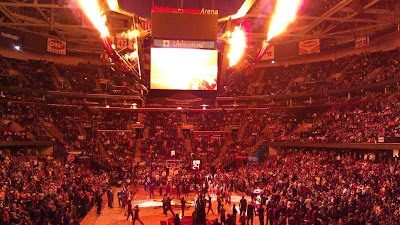 The Cavaliers were on a 26 game losing streak. 26 straight games.
The team went from first to worst. From the penthouse to the outhouse.

But when the opportunity showed up for tickets to see the Cavs and the Clippers play, I had to go to the game. For that game, there was a chance, a chance that they might...just might win. There was no way they could lose 27 games.

Lately, people are giving tickets away because no one will buy them. Season ticket holders are dumping their tickets quicker than a hot potato on the lap. No one wants to go to games. No one wants the frustration of watching their team lose while swigging 7 buck beers. Masochists maybe. But most people would rather sit in the privacy of their own home to curse at the TV in the company of family.

I had to go though. They had to win. The streak couldn't go on forever. The Cavs couldn't lost 27 straight. I wanted to be there to see them win. I had a feeling...the same feeling all Cleveland sports fans get...that hope in the pit of your stomach that this is finally the game to win.

When I arrived at the Q, it was immediately apparent that I wasn't the only one with that idea.  The stands were full. The air was electric with the anticipation of a win. 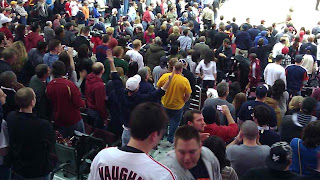 The fans were tired of being the joke at ESPN. I'm sure that the team was as well. The game was going well and then it looked like we had a chance to win. The team played with heart. With a purpose. Fans were on their feet and screaming, turning to high five anyone in arms reach for each basket. By the time the fourth quarter rolled around, it was like game 7 of the playoffs.

Every fan had the same thought, "Oh God, this is where we blow it." But the Cavs didn't blow it. The Cavs won. The streak was broken and the team won! The losing streak was forever locked at 26.

Not only did the Cavs win...they won with a score of over a hundred points, which meant 20,562 chulupas for the city of Cleveland. 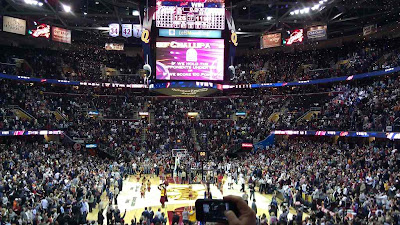 People lingered around. It felt like the Cavs games of the last few season when the guy's name I won't type was there. People laughing and smiling. If you looked around as the crowd filed out into the night, you would have no idea that we were a team with the worst record in the NBA. That the team had just lost 26 straight games...a franchise record. Then something happened, which I think would only happen in Cleveland. People started trying to figure out if the Cavs won every remaining game if they could, oh my, go to the playoffs?

But *that* is what people don't understand about Cleveland sports fans. We love our teams. We rant and rave and swear...but we still watch. We go to the games. We always believe that we can win. We buy the jerseys and vow that next year will be better. We are always waiting for next year.

Posted by Cleveland Chick at 8:40 AM