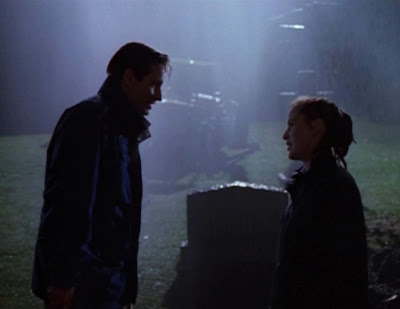 Living back at home with my folks has been interesting so far to say the least. Some things have changed since I last lived there. As an example, I'm the one now running through the house flicking off the lights in unused rooms and chastising the family for their careless use of electricity. Some things are the same, like my dad not turning on the heat until at least one icicle forms off the tip of your nose.

The other thing that has not changed is the same argument that my parents have been slugging out for over 30 years. The basement and its tendency to flood. I must have been 4 or 5 when the basement was filled with water up to the second or third stair after a major storm. I personally thought it was great. Finally, we had a pool...and one in the house? Aweeesssooommee.

We have probably been through at least a dozen sump pumps over the years, all with varying degrees of success.  Some were professionally installed but most were put in by my dad, with each failing pump a direct assault on his manhood. Or so says mom.

Mom was always yelling at dad about the pump and dad always vowing to beat it into submission.

The other night brought all that up again. It was about 1 am, when I heard thunder and my room was lit up with the lightening flashing across the sky. A short time later mom started squawking at dad, who went downstairs to make sure everything was off of the floor of the basement...just in case. Around 4 am, there was considerably more squawking. Some cursing and the sound of one lone generator in the neighborhood.

Then as I crept downstairs...the trickle of water sneaking into the basement. The loud roar of a shop vac made my ears ache. More grumbling. Lots of groaning. Once again the basement was flooded. 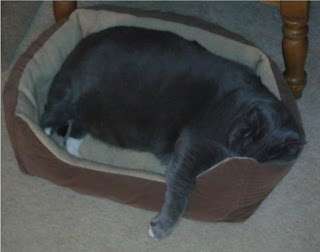 Then mom really freaked out. The cat above, the one in a dog bed, was trapped in the basement. He is afraid of storms, so the lightening hit and he booked it for the basement. All we could hear was a pathetic meowing. Seems mr. tough cat was in the closet in the basement afraid to move and get his paws wet. After we finally found him, following his whimpery meows, dad went in to rescue him. As you can tell, the cat is rather, umm, large, so what followed was something that would have won America's Funniest Home Videos. Another failed dream of video stardom.

I've tried to have a good attitude about it. Getting fans and blowers to dry the scary basement out. I personally hope that the spiders down there have all drown. I suggested to the family that we just have an indoor pool and set up a tiki bar. That came somewhere after the guy at Home Depot laughed at me because I wanted to rent some dryers or fans.

For the record, fans don't arrive there for another few weeks.

Until then, I'll be at the bar. 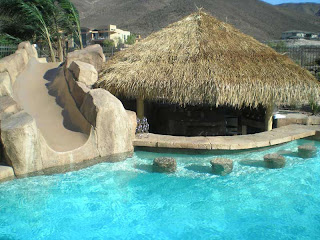 Posted by Cleveland Chick at 7:39 PM