Take Me Out To The Ballgame

Given the chance, people want to do nice things for other people. My trip to Spring Training last month certainly proved that.

Since the Indians moved to Goodyear, AZ for their Spring Training, I have been there. One thing that was different this year was that my dad wanted to go. He had been dropping hints for a year about it being his dream vacation, how he always wanted to go, etc. So, dusting off my halo, I went to work to see if I could make this trip happen for my dad and see if I could make it something special.

As a kid, it was always a great Dad/Daughter adventure going to Indians games, with hot dogs slathered in Stadium Mustard, peanuts in the shell - all the things that make a game great. As I got older, and moved states away, taking in a Tribe game with the old man became more and more difficult. I had to make this Spring Training trip work. The pieces started to come together and then someone asked me if I would like for him to contact Indians GM Chris Antonetti on my behalf. Maybe he could get us into a suite my benefactor said.

I was appreciative of the effort, but by no means did I actually think I would get in contact with the Indians front office. Until I did. Chris Antonetti sent me an email telling me that  he was happy to try and do something to make this trip special for my dad. 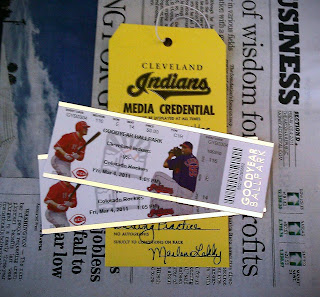 Walking into the Indians offices, we both got a little goose bumpy. Chris told us that he was going to try and hang out for a little bit and he was going to get us into batting practice. I truly thought it would be his assistant coming down and that was that. And that my friends would have been enough. But, Chris not only came down and hung out for a little bit with us (in between conference calls) but he also gave us tickets. 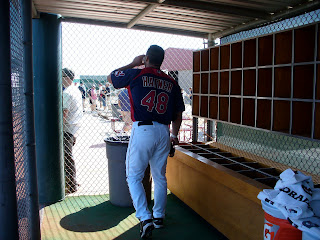 He gave us several options as to where we wanted to hang out, either the press area or the dug out, and we went with the dug out. Let's face it, that is a once and a lifetime opportunity. We were so close to the players I even tripped over someone's shoes.

After making sure we knew that we couldn't hound players for autographs in the dug out, he went back to work.

I have to admit, at this point, Chris became my dad's hero. Here we have a MLB General Manager, taking time to hang out with some fans from Cleveland. Impressive. And rare. 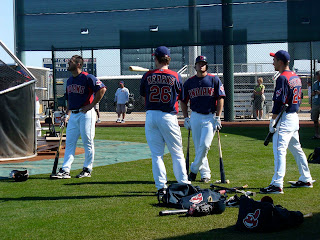 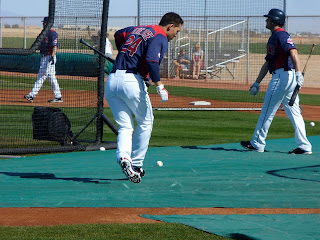 We got to see a little bit of Grady during practice. He didn't play when we were there, but he did get some hits in, which was great to see again. 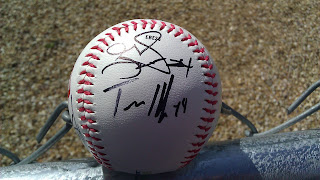 The players were great in signing autographs for me and the old man. It was cute to watch my dad talk to the players. When we got to the game, we both bought those plastic cubes for our signed baseballs. by far the one Indian that *everyone* wanted their picture with was Mike Hargrove. He hugged a lot of little kids in Arizona. Lots of adults were chasing him down for photos as well. Mike was incredibly gracious with them all.
One of the many things about Chris Antonetti that surprised me was he provided us with tickets as well. Another super bonus, that I didn't expect. The interesting thing was that we had tickets, so I figured the best thing to do would be to give ours away.

Have you ever tried to give a complete stranger something? It isn't easy. We were still in the Indians dugout when the idea hit, and since I didn't think it was a wise idea to try and sell our tickets, I just wanted to give them away. The first lady I asked thanked me and said they already had tickets. Ok. Strike one. Then a ridiculous conversation ensued.
Guy: Hey, I heard you were selling tickets.
Me: No, I'm not selling them, I'm trying to give them away. They're pretty good seats.
Guy: Huh, these are upper deck. I don't want them.
Me: There is no upper deck. These are great tickets that I bought a month ago.
Guy: Yeah, not interested.
Me: Grrr.
Strike two.
Then a girl in her mid 20s came bopping over.
Girl: Hey! I heard you were giving away tickets!
Me: I am. I'm trying to give them to someone that doesn't have any.
Girl: We have tickets but I'll bet yours are better so let me see them and we can trade.
Me: No. That isn't the point. I'm trying to give them away to someone that doesn't have any. You have some.
Girl: But...but...I'll bet yours are better.
Me: The tickets are for someone that does *not* have them.
Girl: *Pouts*
Me: *Shrugs*
Strike Three.
But I was saved by a lady that came over and asked if she could buy my tickets to take her husband. When I told her I was giving them away, she looked at me like I had grown a third ear on my forehead. She took the tickets, but she certainly questioned my sanity.
Exasperated, I took dad to the game. The seats were *amazing*. For the first game, we were directly behind the dug out. Very cool. The second game we were directly behind home plate. And when I say directly, I mean when a ball came back and hit the net, it knocked dirt in my soda. Awesome.
The best part of the whole trip was being able to spend quality time with my dad, something I feel incredibly fortunate for.
Now, if I can only get him to stop talking about how awesome Chris Antonetti is. 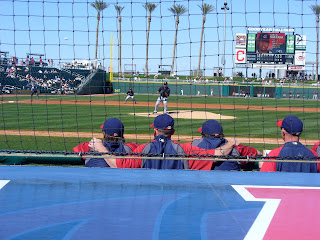 Posted by Cleveland Chick at 10:30 AM