After weeks of voting, it is official, Peyton Hillis is the new cover boy for Madden 2012. If you are not into video games, it is one of the most profitable and loved game franchises. Starting in 1999, EA Sports selected an outstanding player for the cover box, and honor in the vein of a Wheaties box or the cover of Sports Illustrated.

The player on the cover of the Madden box is rumored to be cursed, and after being on the cover, their play declines (usually due to injury). Eddie George lost the 2001 Playoffs, Daunte Culpepper threw 23 interceptions and broke a record for number of fumbles. Ouch. And of course in 2004, Michael Vick broke his leg in preseason and then eventually got busted for dog fighting.

In 2007, LaDainian Tomlinson's fans were so upset, they started a website to voice their opposition to LT being on the cover. Tomlinson eventually declined the honor.

You know what I say to the curse?

We have lived through our hearts being ripped out by Art Modell as he waved a wand and turned the Browns into the SuperBowl Champion Baltimore Ravens.


We have watched our teams come to the door of championship to be turned away by a slip, a fumble, a missed shot, an ouchie elbow.

All due respect Mr. Curse, there is nothing that you can do to Cleveland that we don't already have a t-shirt proclaiming that we have "been there, done that."


In closing, on behalf of Browns fans all over the world, thank you for forcing Steelers fans to bow down to Peyton Hillis when they want to play your game. We appreciate that. 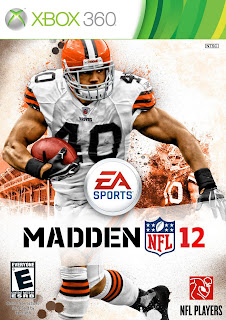 Posted by Cleveland Chick at 10:10 AM