What can a little rain hurt? 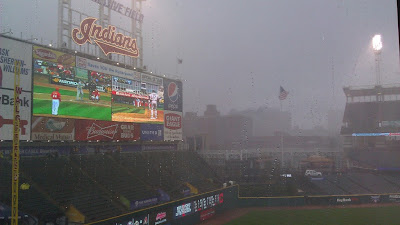 Last weekend I had the bright idea to go to the Indians game. Mother Nature was telling me that I have been to too many Tribe games of late.

It was a cold and dreary day but the weather said it should clear up by game time, so off I went. The goal was to get whatever cheap seat was a available and then hook up with my friends.

Goal is the operative word in that sentence.

I parked my car in my new favorite creepy garage (by Fat Fish Blue, only 6 bucks) and walked over to the ballpark. I found out my friends were in the club, so I procured a bleacher seat with access to the Terrace Club. Wrong club.

I got a window seat in the Terrace Club and happily chomped on a hot dog and watched as the rain came down in buckets. 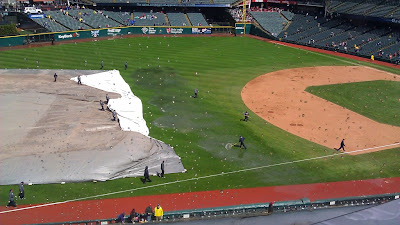 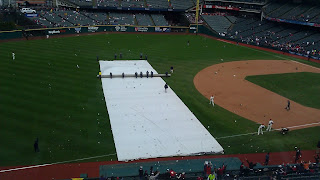 Watching the crew roll up the field cover was a feat. It took a couple of tries before they were able to roll the cover around a large pipe. 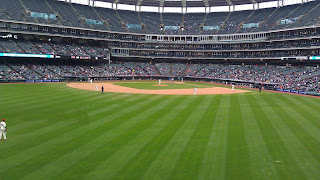 I wandered out to my seat in the bleachers, because really, it is always better to watch a game from the stands than behind the glass.

The rain started again and I wandered around the park looking for cover and a place to watch the game, since my tweet your seat didn't get me a better seat. 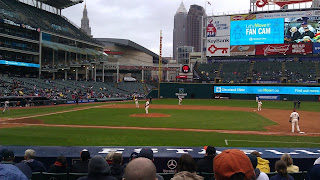 After watching an inning or two I wandered down behind home plate and snagged a seat. Most of the fans had left (or never showed up) so I was confident I wasn't in someone else's seat.

I stayed for the rest of the game, watched a tribe win and hung out with the hardcore fans.

I can't wait for a sunny game.

Posted by Cleveland Chick at 5:25 PM