NFL Lockout: The Greedy, The Ignorant and The Hero

As the NFL Lockout rolls on, the sympathy of the fans is becoming non-existent. Not that the players had a lot to begin with. It takes an enormous set of cojones and an ego the size of Donald Trump for the players to ask for the support of the fans.You have a guy like Peyton Manning that is making more in an afternoon than many of his fans make in an entire year and we are supposed to feel bad for him? Every time one of these guys whines about having to pay their own health insurance, I want to kick them in their enormous cojones.
I do feel bad for the rookies. These guys are missing out on crucial training not only in the sport, but in NFL programming as in how to manage your money and how not act like a jackass.

Which brings me to the Baltimore Ravens Ray Lewis. In an interview with ESPN he said the following:

Umm...
Lewis is claiming that without the Sunday sport, it will become crimeageddon across America. The players will have nothing else to do but break the law. And the fans. Great googily moogily the fans! Instead of getting up at 6 am and drinking Four Loko and a case of beer before the game, they are going to spend their Sundays honing their criminal tendencies. Or oh my goodness, maybe spend the time with their families...or *shudders* sleep in.

A few days ago, I saw a glimmer of hope across the sea of moronica.

J. T. Thomas, a soon-to-be rookie for the Chicago Bears made the dream of a 14 year old West Virginia teen come true. Joslyn Levell is often confined to a wheel chair with spina bifida. It is challenging enough to be a teenager, and I would think being in a wheel chair would add to that. Let's face it, kids are jerks and anything that makes you different from the crowd makes you chum in the waters of high school.
The bus driver, Jake Tennent, knew that the teen was a huge Bears fan, and wanted to arrange a meeting between the two since Thomas' little brother rode the same bus. Thomas rode the bus with the kids to school  and Levell told him about her tough week. All of the boys she had asked to the prom had declined. Thomas signed a few things for her and let her cry for a little bit and then he did something unexpected in this time of me me me.
After clearing it with the powers that be, the Bears rookie asked if he could escort Levell to her prom. She excitedly accepted. He rented a black Chrysler and showed up with a corsage and bouquet of roses. At the dance, Levell got to smile and show everyone that yes, she was telling the truth, her prom date was the former Mountaineer. When asked about the evening she said,

"The first thing one of the boys who was mean to me came up to me and said, 'I'm sorry I didn't believe you,' " Levell said. "It was soooo exciting. I'm just so excited to go to school and see what everyone has to say."

I don't know about you, but on this soggy, dreary Cleveland day, I have a little bit of my faith in humanity restored. 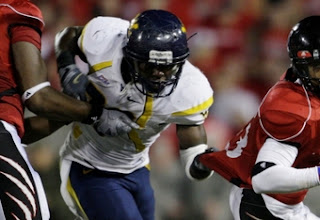 Posted by Cleveland Chick at 11:45 AM