In March, I went to Arizona to take in Indian's Spring Training. When I returned home, the one question without fail that everyone had for me was, "How does the team look?"

To me, the Tribe looked amazing. Lots of great hits. Great games. But more importantly, there was a positive attitude floating around. There was a real excitement with the players and the fans. Travis Hafner looked like the big brother, seriously watching the game and practices, always talking to the coaches. Grady Sizemore was itching to hop in the game.

But, every year I say that.

But this year...this year is different.

And then Grady slid into 2nd base and hurt his knee. To which I said, "crap."

And then Travis got hurt doing I'm not entirely sure what. To which I said, " crapballs."

And then...then something different happened. This time the Indians didn't fall apart. This time, even though star players have been injured, the Tribe has kept on rolling. Other players have stepped up and played hard.

The Tribe is the number one club right now. The first team to win 30 games. The Tribe is in first place.

The. Cleveland. Indians. Are. In. First. Place.

And to that my readers, I can only say one thing...Roll Tribe! 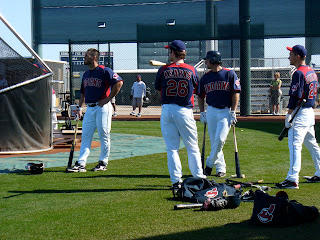 Posted by Cleveland Chick at 5:34 PM