Volunteering at the Cleveland Marathon

There is no better way to spend a cold and dreary Sunday than to cheer on those that are motivated. Staying in bed and napping would admittedly be a good choice, but so was volunteering for the Cleveland Marathon at a water stop. I got up at 3 am, which in itself was strange. I'm used to coming home at that time, never getting up at that ungodly hour. I was out the door a little after 4 am with mom in tow (if you follow me on twitter, you will know she hates Boston Rob and really hates LeBron) we drove to pick up my aunt. Volunteering was a family affair for this event. We made it to our assigned spot on the route by 5:30 am.

The weather was terrible. The fog was so thick and the dampness hung in the air. The chill went right through you. Looking down the deserted road, I was waiting for a pack of zombie runners attacking out of the fog. I clearly had not had enough caffeine.

We got right to work though, on the sides of the Shoreway setting up tables with rows and rows of water and powerade. Then we put cardboard on top of those cups and layered with more water and powerade. These ladies had the system down. There were several scary moments though when cars somehow made it on to the closed Shoreway and buzzed by us. I felt like I was the tower in Top Gun. 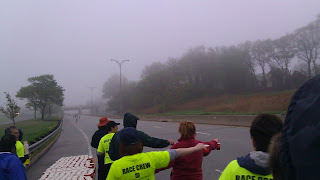 The runners slowly started to come towards us. We shouted if we had water or powerade and they could grab and chug what they wanted. At this point, I thought this was a piece of cake. 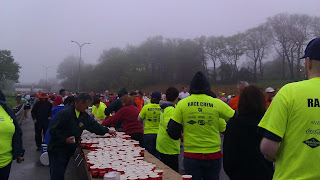 It was a swarm. I would grab 5 cups of water at a time and as soon as I got to the line they were gone. Yikes. The runners were amazingly polite. I'm not sure what I expected, but there were numerous runners that shouted out "Thank you for volunteering! You guys are awesome!" I guess if it were me, I would be gasping for breath, so I wouldn't be shouting anything to anyone. 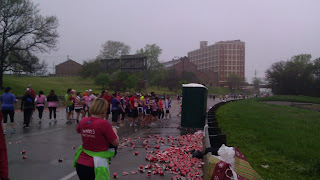 And then a funny thing happened. The line for the porta potty reached Muni-Lot proportions.  It got a little dicey with runners running around the potty line. One poor guy hit the ground and I thought for sure he was going to get trampled. Thankfully he popped back up and kept on running. 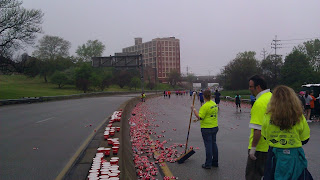 Almost as quickly as they came by, they were gone, leaving a wake of empty cups and tossed sweatshirts behind. We cleaned up using brooms and snow shovels and by 8:30 am, we were on our way to breakfast.

Afterwards, I treated the family to a place called Gabe's that had the most amazing peanut butter pancakes on the planet. This place was well worth getting up early for.

Posted by Cleveland Chick at 8:55 AM