What is old disappears...

Some of you may know that since I returned to Cleveland, I work in Slavic Village. It has vastly changed from when I was a kid. It has turned into the type of place that I consider whether or not I should leave the building for lunch for safety reasons.  In the past 6 months or so, within a 2 block radius of my job there has been one murder (I missed being in the crossfire by about 10 minutes), 3 shootings (including one during lunchtime in the Mickey D's drive thru), a carjacking and at least 3 muggings. Oh, and an arson.

Before we get to the arson, the one thing that you, dear reader, may not know is I have a love of old architecture. I love old buildings if for nothing else than their stories. Looking at a building, I wonder of who lived there, how proud they were of their store front, those sorts of things.

On my way to work every morning, I passed this building, and even before someone tried to burn it down, I was intrigued. If it were in a different neighborhood, I would be paying entirely too much to live in it. Let's be honest here, I probably couldn't afford to live in it.

After returning from Christmas, I saw that someone had tried to firebomb the building. Maybe even shot up the windows. Whatever they did, they were successful, so that section of the building was torn down. It happened so quickly that I didn't properly kodak the moment. 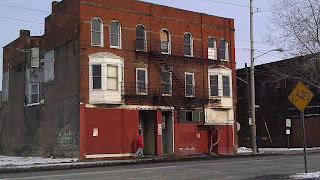 What was left was an entirely different building. I had no idea that the first one was an add on. You can faintly see on the left an old advertisement for tobacco I believe. 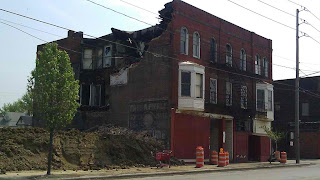 And then the bulldozers came. As they tore sections of the building down, you could see inside the apartments. Shelves stuck to the walls. Old signs. Even door numbers. 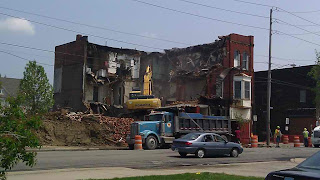 As each section was torn away, I couldn't help but watch. Looking into each room, seeing what they had become. Old cabinets and dressers left behind. Did the previous owners leave them on accident or did they just not care? 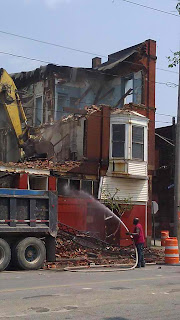 Throughout the process, this one guy was watering down sections as it was torn down, to hold down dust I presume. Interesting to note, this was the only guy on the site without a hard hat. Maybe he figured if a whole section came down on him, his head was the least of his worries. You can barely tell in this picture, but there is a busted out window stuck in the tree.

I was rooting on the tree to survive. Huge hunks of brick and window and wood rained on the little tree, but it took it like a trooper. 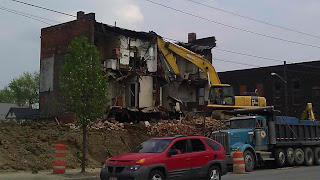 As the day progressed, so did the destruction. The modern equipment making it look simple to tear down what stood for over a century. 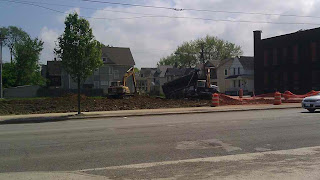 Posted by Cleveland Chick at 9:00 AM