Sometimes, a beer is more than just a frosty tasty adult beverage.

In all the years I lived away from Cleveland, there would be days that I got homesick.When you are hundreds of miles away from friends and family, it happens. I'm not made of stone here people. Maybe a big game was on and I had no one to share a win with or commiserate a loss with, or maybe it was Tuesday. So, on those days, I would do anything I could to feel a little more connected to home.

Maybe that meant breaking out a bottle of Stadium Mustard and making a hot dog while trying to watch a grainy feed of the Cleveland Indians on the internet.Or maybe watching the opening credits of the Drew Carey Show when he was running through Cleveland. Sometimes, if I were exceptionally lucky, I would find a 6 pack of Great Lakes Brewing Company Dortmunder Gold. I can tell you that on more than one occasion, that beer would have enough dust on it that I could make a little smiley face in it before happily drinking it down.

On the weekends or holidays that I would return to Cleveland, it was spent with my folks in the burbs or in Akron visiting my friends. Time was short and I had to make the most of it.

When I decided to find a job and get back to Cleveland, a process that took *years,* part of what kept me motivated was things like going to Cavs/Indians/Browns games any time I wanted. Rolling around in the back of my head was the idea that I could go to the Rock Hall and have lunch with Little Richard. The awesome scenarios were endless. But the most exciting thing for me was envisioning the cool places I would hang out in and make my own.

Great Lakes Brewing Company is one of those places. Not only is it the first microbrewery in Ohio, but the Taproom bar has bullet holes in it rumored to be from Eliot Ness. And I thought Indianapolis' Slippery Noodle was cool.

Each time I have visited Great Lakes Brewing Company, it has been a great experience. The history of the bar is intertwined with the city of Cleveland. The beers are exceptional and the food is darn tasty (I'm a big fan of the Italian Market pizza or the pierogies of course).

Last night, I met some friends for happy hour in the bar and it was exactly how I had pictured it in my head, all those years living in Tennessee and Indiana.

What can I say? 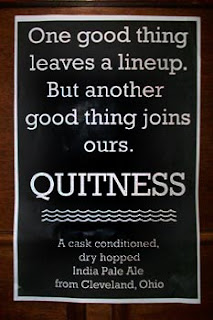