Thank You Colt McCoy For Not Having Me Arrested

There are several types of autograph seekers. The first group are the fans that want any autograph of any player just to have them. These are the guys that have boxes and boxes of memorabilia and they just want everything signed. The second group is much like the first except they sell the autographs. They want very specific things signed in a very specific way by certain players. The last group are the true fans that just want a piece of their team.  I fall into that category. We have our favorites and are giddy with excitement to meet our favorite player and maybe get a signed ball or jersey.

If you follow me on twitter (@clevelandchick) you likely witnessed my quest to meet Phil Dawson, the kicker for the Cleveland Browns. He was fantastically nice, and signed my football as well as a picture.  He even chatted a little. It was a great fan experience.

Later, I caught word that Colt McCoy was hosting a football camp in Strongsville and I decided that I needed him to sign my football. Colt, then Bernie then Peyton and Josh. That's my plan.

As my mom said a million times before, you never know unless you ask. So, I asked Colt on Twitter if he would sign my ball. 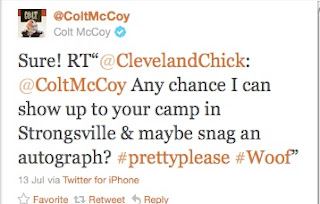 I bought a new Sharpie paint pen (the best ever for signing footballs by the way) and headed off to Strongsville High School to get Colt's autograph.

Walking over the fields, I wasn't sure if I was even allowed to be there, so I tried my best to blend in and look like I knew where I was going. There were fields of kids, so finding Colt was not going to be an easy task. After a while of searching on my own, I found a few Browns fans by one field, but they weren't giving up Colt's location. I knew I had to be close.

I found Colt on the third field, posing for photos with some of the camp staff. The staff was shooting a little video with him as I clutched my football and shook my paint pen like my life depended on it. I had to be ready. I figured this would be my only shot, catching him between fields and not interrupting the program (since, it isn't about me after all).

My palms were sweaty as I waited. Colt walked in my direction with a guy I'll call The Handler. As Colt approached I blurted out, "Coltwouldyoupleasesignmyfootball?" I was as bad as Ralphie asking Santa for his Red Ryder BB Gun. Colt smiled and said sure, politely signing my ball as The Handler looked at me and said, "Wait a minute...you aren't with the camp..." Uh oh. It was at this moment that I was sure some horn would sound and I would be carted off by two large body guards and tossed into the parking lot.

I looked at The Handler and said. "No sir, I'm not, but I asked Colt on twitter if he would sign my ball and he was nice enough to say yes." The Handler chuckled and said, "He did huh?" Colt looked at me and laughed saying, "That was you?"

I'm not sure what he expected, but yes, that was me. I shook his hand and welcomed him to the team and off he went, to spend time with the rest of the kids at the camp.

Proudly, I walked around the camp, waiting for another glimpse of Colt. I ran into some friends that had kids at the camp and they wanted to know my secret for the autograph. It seems that it was announced that no autographs would be given to anyone other than campers.

Posted by Cleveland Chick at 10:34 AM