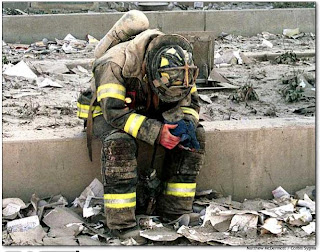 This week I had a young man come into my office to ask me about 9/11 for a school project. The project was to ask people where they were and what they remembered.

I started off telling him that on the morning of 9/11, I was originally supposed to fly into Baltimore for a conference, but I changed my plans the week before and was going to go on the 12th. So that morning I already had the day off so I just hung around the house watching the Today show. I saw every second of it.  I remembered the shock when Katie and Matt talked about a horrible accident of a plane flying into the World Trade Center.

I also remember that after the second plane hit, someone from the news program called the offices of Cantor Fitzgerald, an investment bank.  These folks, more than 600 people were trapped on the 101 floor...with no chance of escape. Katie Couric read the report. She said ,"when the office of Cantor Fitzgerald was called and we asked what was going on up there, the person on the phone said we are f-ing dying up here. We are f-ing burning alive what do you think?" Katie then said that when called back no one answered. I remember thinking that was something that NBC should have left alone.

In talking to the young man, it hit me that he was a little kid then, not more than three or four, so he really didn't know. I explained that at the time, no one really knew what was going on. I will never forget people walking up to news crews with pictures of their loved ones begging to get on the air to find them. I remember rushing out to give blood for all the casualties that never arrived.

At the time, I had a friend that, last I talked to her she was starting a job in one of the WTC buildings.  Thankfully, she had moved from there months before, but I didn't know that.

In 2011, that was before the social media explosion. You had to call or email someone. Phone lines were clogged and down. The young man in my office was shocked when I told him there was no Facebook or Twitter or text messaging to get in touch with someone.


With all the tribute programs on, I can't watch a single one. I saw every minute of coverage that day, and I'll never forget it.

I'm not sure what is better...having never known anything other than a pre-9/11 world or remembering what life was like before and knowing that it will never be the same again.

Posted by Cleveland Chick at 9:34 AM

Email ThisBlogThis!Share to TwitterShare to FacebookShare to Pinterest
Labels: 9/11