Tipping Is Not A City In China 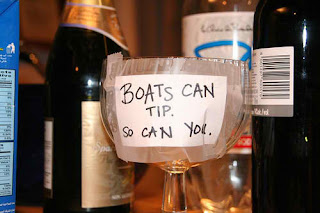 The subject of tipping has come up quite a bit lately. From Peyton Hillis leaving a tiny tip to a bartender being left the tip of "you can stand to lose a few pounds" to a push in San Fransisco for servers to get a mandatory 25% (which has since been proven bogus).

Working in the hospitality business is tough and not for the weak or flat footed. You are at the mercy of the customer to make a living wage.

I have been a bartender and server for what seems like eons. Here are a few tips...even in a recession.

If you can't afford to eat out, don't.
Yes, I know, like Donna, you work hard for your money. But so does your server/bartender/hostess/busser. If you say to yourself that you deserve a good meal and nice night out, by all means, go for it. But, treat the tip like part of the bill. I will freely admit that there have been times that I would have loved another cocktail, but in doing so, I wouldn't be able to tip. So, sadly, sobriety had to win out.

The server that is waiting on you is making about a third of minimum wage. And then on top of that, a grumpy manager looks at their sales and requires them to tip out the hostess, food runner, busser, bartender, etc. The tricky part here is that if I work all night and heaven forbid not making any tips, I still have to tip those people out. I can lose money by going to work.

I had a table once that was a family of four. They shared meals and ordered one root beer for the table. Ugh. I refilled that root beer so much that at one point I looked under the table for a barrel that they were dumping it in.

Even though I was irritated, I was still friendly and I was pleasantly surprised that at the end of the meal, they left a 20% tip. Awww.

Yes, the server/bartender remembers you from last time
This is a true fact - I am horrible at remembering names. Terrible. I can meet you 10 times and still not have the vaguest clue as to your name. But, I will remember exactly what you ate and drank. Try it sometime. I'm a fun party trick. Likewise, if you come into a place a couple of times, the bartender/server will remember you.

Well, let me throw a little caveat in there. Your server/bartender remembers you if you were an awesome tipper or if you were a cheap jackwagon. Anyone else falls off the meter. If you are trying to build an alibi, leave a great tip.

I can point out in a crowded room a crummy tipper.

A few years ago, I was bartending at a swanky partay thrown by a law firm in Indy. I had a guy that was such a pain, ordering drinks that we didn't have ingredients for. I even, to be nice, hunted around and found a pint of creamer for his Kahlua and creams (here is another note, if you are at a bar for an event, unless the planner forked out big bucks, options are limited, deal with it). He later picked up the habit of *snapping his fingers* at me from across the bar. This from the guy that had not left a dollar all night.  Kids, nothing will get you ignored quicker and cause dirty looks to go xxx than snapping your fingers at someone.

The last tip...Servers and Bartenders are people too
In the above example, the foolio lawyer clearly thought it was appropriate to treat us like some sort of servant. Yes, I'm there to wait on you, but I'm not being paid enough to put up with your nonsense.

Maybe that is why some servers have gone to pubic shaming of bad tippers. In the above example, the bartender that received the weight loss tip, she posted the guy's name on the web and called him out. Yay. But, oopsie...she called the *wrong* guy out.

In the new world of immediate feedback, the pressure to get your order right and give you a great experience is huge. One cranky customer tweet or facebook post can send a server packing. I remember cutting off a girl once who screamed at the top of her lungs that her father owned verizon and I was as good as fired. She later came back to complain about the tall blonde girl that was so mean to her (note: I am not blonde and most certainly have never been described as tall). If that was a direct tweet to the boss, who knows what would have happened.

The point is, let's try to be nice to one another.

Posted by Cleveland Chick at 4:30 PM

Email ThisBlogThis!Share to TwitterShare to FacebookShare to Pinterest
Labels: Serving