Last week, it was announced the LeBron James, Dwayne Wade, Chris Paul and Carmelo Anthony hooked up with Google+ for what they were calling the Homecoming Tour. The idea is that these guys will travel to four cities - their hometowns and woo the NBA starved fans. The best part is that the proceeds of the tour will go to each of the players foundations.

There are those out there that think this is a good thing, that LeBron is doing something positive with his vast wealth.

I however, am skeptical.

I'm not going to quibble on what "proceeds" mean. Since he has seemingly now found a philanthropic soul, I'm going to assume that he is paying for his own travel, the travel of his posse, food, hotels and entertainment.

Before I continue, and in the interest of full disclosure, I am a fundraiser by profession. I try to get people to part with their money for a charitable cause. Since I am a fundraiser, I know that the reasons that people give to charity are as varied as the charities themselves. I was at a recent conference and a new study showed that the number of people that give for purely altruistic reasons is something like 5%.

People give because they feel the need to help others, they want to make a difference in the world, they want to feel better about themselves, their PR agent tells them to...you get the idea. 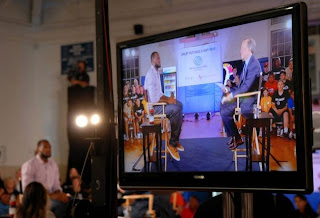 I am skeptical of LeBron's motives because in general, he is not a philanthropist. Let's take the situation called the Decision. Before that event, LeBron had not had any sort of relationship with the Boys and Girls Club in Cleveland. I can't think of any charity that he supported during his time in Cleveland. This is the guy that just for example in 2008, made $40.5 million.

But then he found God or a new PR team and used a bunch of kids as human shields to deflect the slings of questions on his integrity while making his decision to move his family to South Beach.

I found his decision to use a bunch of kids as a prop despicable. The ad money from his venture with ESPN went to the clubs instead of him. Yay. Good job. I would have been more impressed if he said he was going to match it with his own funds.

That would have been something.

Now, this brings us back to the current day. This Homecoming Tour, charity basketball games with the ticket sales going to each player's own foundation. Games that are nothing more than street pick up games at NBA prices. And for this, all should be forgotten and forgiven?

Friends, I am not impressed. Maybe I would be more impressed if the players took their tour to Iraq and played for the troops, maybe bringing them something from home.

But does my opinion matter? Should I question LeBron's motives? Ultimately, if by this fool and his friends playing a little game in front of a crowd of suckers, helps make the world a better place, so be it. If the charities are well run and give back to the community, good for them.

I don't have to like it. These guys don't need my approval to do whatever it is that they do.

Because, at the end of the day, I'm going to wake up tomorrow and have the same life I had when I woke up today.

And so will they. 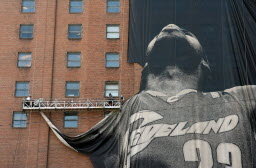 Posted by Cleveland Chick at 6:58 PM