This past week, NBA player Chris Paul set off chat about ring chasing. He finally got his wish and the New Orleans Hornets traded him to the Los Angeles Clippers. He now wants to be a winner and thinks that the only way to get that is through LA.

Craig over at WFNY posted his thoughts about the situation here, which I recommend reading.

Here in Cleveland, we know a little about ring chasing. We had two players leave the Cavaliers to the Miami Heat, and one was welcomed home to thunderous cheers and the other is lucky he hasn't gotten a car battery chucked at his head. 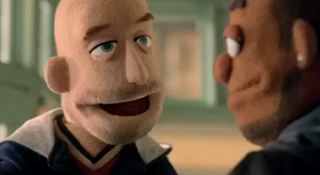 I'm of course talking about Zydrunas Ilgauskas and LeBron James. These are two very different men that illicit very different responses when they return to the Q. This weekend I was at a Cavs scrimmage game and when Z popped his head out, the crowd cheered louder than for any player on the court. Heck, I was strong arming my Cavs ticket rep to get an autograph for me. I promise you that the reaction for LeBron would have been the polar opposite.

Why is it that I'm ok with Z chasing behind LeBron to Miami in a quest for a ring but LeBron and his race makes the vein in my forehead pop out?

I think it comes down to attitude and intent. LeBron promised and swore he would bring a championship to Cleveland. The self-proclaimed king made us believe. That is until he didn't want to win in Cleveland anymore. Conspiracy theories abound, but a popular one is that LeBron tanked game 5 so he could go off and play with his buddies in Miami. Whether he purposely tanked the game or just forgot that he was supposed to shoot with his right hand, I don't know.

What I do know is that when LeBron left, he had no intention of returning. He didn't want to leave a legacy in Cleveland. If we are honest with ourselves, LeBron very easily could have had a statue outside of the Q. Fans making pilgrimages to take their pictures with the once mighty king. When LeBron left Cleveland, it was like the coyote rammed a stick of dynamite in his rear. He didn't care about the fans. When LeBron left, LeBron did what LeBron wanted to do for LeBron. He left the city of Cleveland to witness the chalky dust in his wake.

Z, well, Z in my mind is a different story.  I'm not happy he left for the Heat. But, I couldn't begrudge the man for chasing what was his last shot for a championship. LeBron and the Heat looked like an easy score. Z was honest about that. He was gracious and grateful to the fans of Cleveland. He even talked about returning to the city.

I guess that is really the difference. That is why Z's number 11 with be retired to a packed house of Cavs fans and LeBron's number never will. 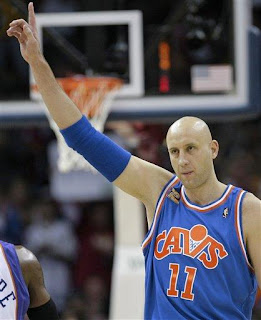 Posted by Cleveland Chick at 9:43 PM