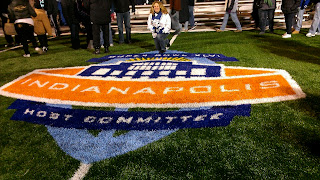 While we are all waiting for the big game, this is a perfect time to share with you all my visit to Indianapolis last weekend, my only chance to run through the SuperBowl Experience without all the tourists.

Before I continue, I have to tell you, the city of Indianapolis does an amazing job with big events. For anything ranging from the blue-jacket-wearing Future Farmers of America to the Indianapolis 500, the mindset of the city is perfect for visitors. Like most Midwest cities, people are welcoming and full of Hoosier hospitality. 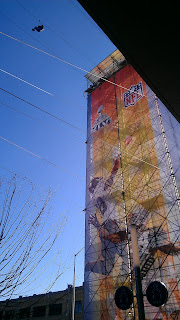 I haven't lived in downtown Indy for over a year and the changes are amazing. Georgia Street has been permanently changed into a pedestrian walkway (Cleveland readers, think East 4th), and a ginormous zipline was created to speed visitors through it. Personally, I am a big chicken, so I sat this event out. The funny thing about the zipline is few people thought about how to get up to the top. If you look closely at the picture, you can see all the stairs that adventure seekers had to climb to get to the top. There was a lot of huffing and puffing, but it seemed like a blast. 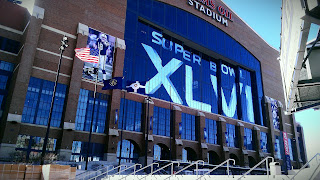 I started working at Lucas Oil Stadium when it opened as a bartender and it is a pretty cool stadium. The roof retracts and the giant window slides open, which was rarely done. Rumor had it that Peyton didn't like the harsh shadows from the sun, so the roof was mainly closed. That and there is no drainage on the field and nothing is waterproofed, so closed it stayed. 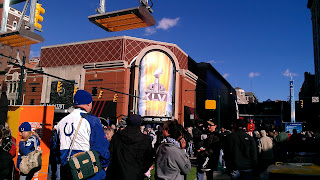 Several streets were closed off to allow for the concerts and bars and general fun. 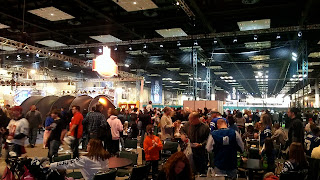 I went through the NFL Experience and I had a mixed trip there. It was HUGE and interesting, but I think it was more suited to kids. There were tons of pass, punt, kick type things and lots of stuff that looked like it was moved out of the Pro Football Hall of Fame in Canton to Indy. I ignored most of the "experience" things because quite honestly, the lines were long. 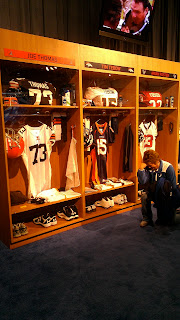 One display was a locker from each team. I don't think that they contained actual items for each player, since they were all almost exactly the same. The Browns' Joe Thomas was on display...next to the Broncos' locker, which was none other than Tim Tebow. The was a long line of people wanting to Tebow. 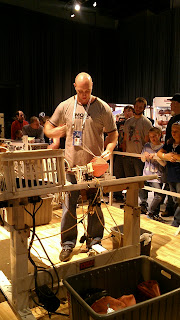 Wilson had an area where you could see how a football for the big game was made. I had no idea the number of steps involved. The SuperBowl game balls have some sort of invisible DNA markers on them that can be verified via laser. Whoa. 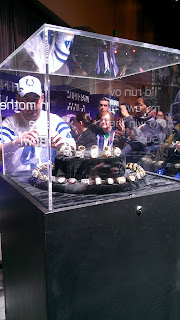 Next to Tebow's locker, the most photographed exhibit was a tie between the Lombardi Trophy and a display of rings. This picture can't even start to do justice to the enormity of some of the rings. Blingity bling is an understatement. 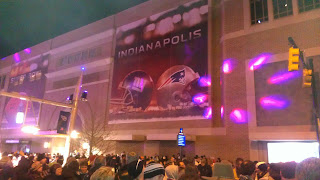 As the night progressed, I wandered into the street, took in some live music, ran into old friends and took part in a tailgate that made the Munilot seem tame.
Ok, not really, nothing is rowdier than the Munilot, but all in all it was a great time. I hope some time in my lifetime the Browns will be in the big game.
Posted by Cleveland Chick at 3:50 PM