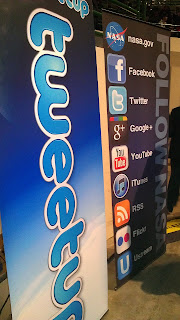 When I was a kid, my favorite field trip was to NASA Lewis Research Center. A day of learning about science, dreaming of space and scarfing down astronaut ice cream. A kid's perfect day.

My parents however, would dread those trips because it meant more Tang in the house. Thankfully, they played along. I grew up loving everything space, from TV shows like Lost in Space, Star Trek and even the Jetsons to movies and books.


As an adult, I have come to realize how amazing NASA really is and how getting to space was and is more than clicking your heels and making it so.


Twitter has afforded me many things since I jumped into the nest. Free hotel rooms, ball games, swag, but nothing better than and official NASA Tweet up.


For those not surrounded by the Twitter landscape, a Tweet Up is an opportunity to meet people face to face that you have been conversing with in cyberspace. Usually a bar or restaurant will host tweeters for a few hours in hopes of getting the name of their business repeated fast and furiously. They are great, fun events that help you to put name to avatar.

NASA has started to have Tweet Ups around the country and the one in Cleveland was to honor the 50th anniversary of John Glenn, the first American to orbit the Earth. John Glenn is a true American hero. And if you are an Ohioan, he is a favorite son.

The event started with issuing of government badges and a bus tour of NASA Glenn Research Center. 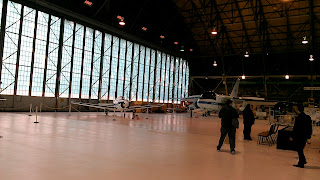 The first stop for our group was the hanger will all sorts of planes and equipment including an ejection seat. It was at this stop that I learned that of the 100 people invited to the event, less than 30 were from Cleveland. There were folks that drove from all over to be a part of this program.  While wandering around the massive hanger, looking at planes and chatting with the staff, I noticed that these people love their job. Everyone from the pilots to the souvenir stand folks love what they do. Most of them had no idea how to tweet, but that was OK. Everyone was happy to show them.

Not only did NASA have lots of staffers for us to talk to, they also set up a charging station so everyone could keep their phones and laptops alive. 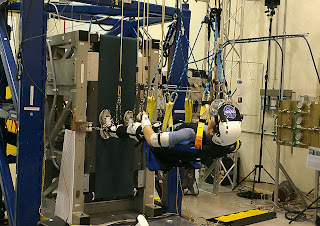 As the tour continued, we visited a couple of labs. This was the Exercise Countermeasures Lab, and Jeff hooked up to the treadmill. This contraption tests what it is like to walk in space. It looked incredibly uncomfortable, but he assured us that he was fine.

Again, the staff was friendly and chatty. The best part of this section was a story they told us about the crew on the space station. It seemed that the guys were tired of taking sponge baths, so in an area that was not covered by cameras, they built a shower. Shortly after there was a problem with mold on the station and the guys had to come clean about their build. Ingenious.

After leaving this lab, we went on to see the largest zero gravity chamber in the world and then we hustled on to the Great Lakes Science Center.

While at the GLSC, we were able to grab some lunch and take a quick tour of the NASA artifacts there, including the capsule from Skylab. 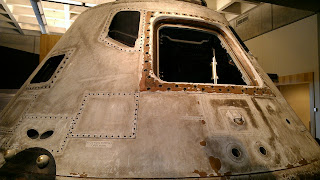 Most of the museum type pieces that used to be at NASA Glenn, are now at the Great Lakes Science Center. One advantage to the items being there is accessibility. With NASA being a government facility, if you are not a US citizen, you were previously unable to visit the museum. In their new home, any tourist or space fan can enjoy them.

Since we were on such a tight schedule, the people at the GLSC were nice enough to give everyone a free pass to come back and visit another time. With so many interactive exhibits, I can't wait to go back. 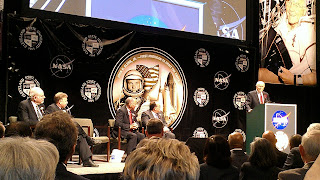 The next stop was Cleveland State University, where the ceremony honoring John Glenn was taking place. The audience was full of NASA and government muckity mucks and 100 social media fiends. During the presentation, there was a video honoring Glenn and it struck me how different a time it was 50 years ago. The capsule that Glenn left the Earth in was the size of a VW beetle and had less computing power.

When Glenn returned from orbit, he was welcomed a hero with a parade sitting next to President Kennedy. His trip to space helped change the future. As I sat in the audience, I couldn't help but wonder if there will ever be another American Hero like Glenn.

The highlight of the program was John Glenn speaking to the audience about the importance of education and funding NASA for the US to stay competitive. 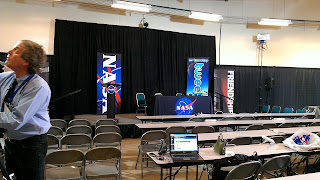 I thought that was the highlight of the day.

After the program, we were escorted to the media room for a press conference featuring NASA brass, John Glenn and astronauts.


Surprisingly, the media had few questions. The twitter attendees however could have gone on for hours and hours.

After Glenn and the NASA chiefs left, a panel of astronauts sat through a Q & A. Again, the social media folks could have asked questions for hours. What struck me as incredibly funny was astronaut "Box" Johnson. The guys were joking a bit about nicknames and how he wanted to go by his nickname. 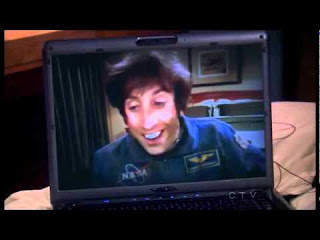 I could not for the life of me get the Big Bang Theory out of my head and the episode where Wolowitz tries to get a cool astronaut nickname.

As everyone scrambled to get a picture with an astronaut or an autograph, I realized how incredibly lucky I was for this opportunity.

On the return bus trip, one of our guides thanked us for our excitement and enthusiasm. She said that we were a reminder for how incredibly awesome their jobs were.


I wonder if NASA will hire me and if there is Tang in the break room.

Posted by Cleveland Chick at 8:51 PM