Why Cleveland Needs a Tim Tebow

Or, we at least a reasonable facsimile.

Play along on this one...

Colt McCoy doesn't have what it takes to lead the Cleveland Browns.

I think Colt McCoy is a nice kid, but I think Tebow would crush him in the role of quarterback. I'm just going to put it on the line here, after that punishing blow by James Harrison last year,  I don't think McCoy will ever be the same.

The concussion that resulted was *at least* the second major one for McCoy. The last one was so bad that he was out of commission for an unusually long period of time. McCoy will be hesitant on the field and he will get hurt this season because of it.

Not only that, but the medical staff on the sidelines that is supposed to protect him failed. Yes, they were tending to other players, but no coaches saw the hit? No one in the booth? Or heavens to Murgatroid, Holmgren didn't see it?

McCoy is going to carry all of that the next time he trots out onto the field. I will happily chomp each megabyte I type if he is a success. But, I'm sorry, he doesn't have it.

That is the easy answer as to why the Browns needed to go after Tebow. McCoy isn't the guy we need at quarterback. But it goes much deeper than that.

The Browns needed Tebow to be relevant. At the NFL Experience this year in Indianapolis, the most talked about photo opportunity was Tebow's locker. I couldn't get a clear shot of the Browns' Joe Thomas stuff without someone Tebowing.

The only time I had ever seen Browns jerseys for sale outside of Cleveland was in Indianapolis when Brady Quinn, the Notre Dame quarterback was drafted.

This isn't just about selling jerseys. It is about having someone that can rally the city, or better yet, that the city can rally behind and be proud of.

With all his faults and lack of break up skills, LeFoolio did give the city something. I still get a tear, albeit an angry one now, at those Nike commercials. The old folks showing their pride cheering from the nursing home or little kids getting 23 painted on their faces. I hadn't seen anything like that since the Kardic Kids.


I begged and pleaded for that damn Kardiac Kids tshirt. It had my elementary school name on the back. It was a great time. The whole city was behind the team. It was a phenomenon.

And then..nothing until the Cavs drafted some kid out of St. Vincent-St. Mary high school. 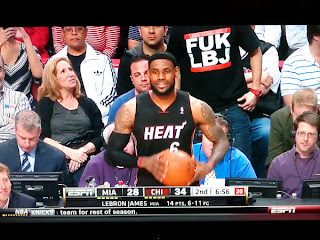 LeFoolio left a void in the city landscape, and I don't just mean the Nike banner across from the Q.

When he was bringing everyone to town to dance in front of him, the city bonded together to do everything they could to make him stay.

For crying out loud, Dick Goddard was in a video for him.  Dick. Goddard.

Everyone got involved not only because we wanted a winning basketball team, which don't get it twisted, so do I, but it was about making Cleveland relevant again.

Who else on the Cavs could do that? No one. Sure, Kyrie Irving is great, but he isn't a superstar.

What about the Indians? We briefly had super slugger Jim Thome home. You couldn't find a red knee high sock in the city last year. Sadly though, he moved on.  While we have our local favorites, there isn't anyone on the tribe that brings the city together. It isn't like we traded for Albert Pujois.

That brings us back to the Browns. Even though I love Phil Dawson, Josh Cribbs and the rest of the guys, no one else cares. Sure, Joe Haden is a great fan favorite, but until my mom can pick him out, it isn't a big enough deal. We had a brief flash of recognition with our Madden cover boy, Peyton Hillis, but that ended in a hot mess.

Even though the Tebow deal is going back and forth and is being finalized with the Jets, we didn't even try to get him. As a fan, it makes me want to pull each of the hairs in my eyebrows out, one by one. The Browns need to get the team back on track with someone.

The city's fanbase is a demoralized mess.

I would like for Cleveland to be known for something other than not chucking car batteries onto the court at LeFoolio and a puppet re-enactment of a major trial.

I'm holding out for a hero.

Or at least another Iron Chef.

Posted by Cleveland Chick at 3:38 PM