How To Get Fans To Indians Games

The Cleveland Indians are a first place team in last place for fan attendance.  For weeks now, the topic of fan attendance has been front and center. Then pitcher Chris Perez offered his opinion.

Twitter exploded, along with heads all over the city, when Perez went on a rampage calling fans out for not showing up to games. Why the premise is fair, his delivery left something to be desired. Bless his little mullet head, I think Perez went to the Lefoolio school of fan relations. As the weekend progressed, the issue didn't go away and team president Mark Shapiro came out to let fans know the team didn't agree with Perez's take.

The weekend was full of fan vs. fan barking at each other blaming one another for not going to enough games.

For some reason, fans aren't showing up to games. Is it the weather? The economy? The owners? The casino? The midges? I have a few ideas in this post why fans are staying away, but the focus now needs to be how to get fans in to the games.  Filed under the category of putting my money where my mouth is, my suggestions for boosting attendance are listed below.

The Indians have dozens of corporate sponsors. The sponsor, Drug Mart for example, pays to have their brand promoted and in return, they receive advertising and perks such as the use of a suite or free/discounted tickets for employees. As a gesture of goodwill, the Indians need to offer more tickets to their corporate partners for free or a discounted rate.

By doing this for a "slow" day, maybe a week night, people will be in the seats that would normally be home. More people in the ball park means more money for area parking, restaurants and concessions.

Right now the seats are empty, so why not fill it?

Work the social media angle - a Tweet Up for the ages 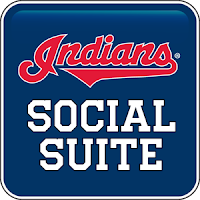 The Indians were the first MLB team to fully embrace social media. I know there was some turnover in the social media department at the Indians, and it is now time to start to build new relationships with the internet folks.

The first thing that needs to happen is someone needs to be dedicated to monitoring and replying to twitter and facebook posts, comments and questions. Make relationships with fans. Encourage interaction. Share their comments and tell them where they can find the carmel corn.

Second, have a one of a kind event. I personally think it would be a great idea to have the largest tweet up in history. The San Francisco Giants had one and the Detroit Lions Ndamukong Suh broke the world record for a tweet up with almost 2,000 fans showing up. The Tribe could hold the event on an off day at the ball park and include tours, hot dogs, mascots, grounds crew, music and maybe a few players.

The publicity surrounding thousands of people tweeting and then hundreds of people blogging is buzz that the Indians can't buy. You want to get people fired up? Present a challenge that the city of Cleveland could win. I really like this idea if I do say so myself. 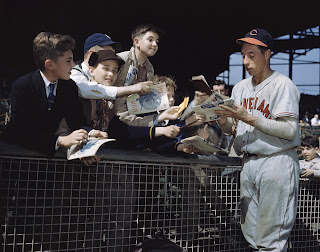 I love my Tribe, but from a fan's perspective, it seems like some of the players aren't exactly fan friendly. At Spring Training in Goodyear, there would be anywhere from 15-50 people watching batting practice begging for an autograph or a photo with their favorite player. Most guys were receptive. Most guys, would stop and sign autographs, even though you could tell it wasn't exactly their favorite thing to do. In the week that I was there, going to batting practice every morning and then to each home and away game, I only saw Asdrubal sign about 20 items. Period. On the flip side, I saw Hafner sign some little kid's pink fuzzy whale.

In contrast to the Tribe, at the Angels game (and they did this last year, before Pujois as well) the players high five and sign on their way from the buses into the stadium. The number of people lined up went on for 5 or 6 blocks. Then, the team walked through a path in the crowd, through the stands and on to the field.

If fans are connected to players, they are going to come out to the game. 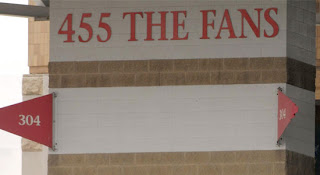 Let's face it, being a Cleveland fan is rough going. We get called out for being too fired up and then for not being fired up enough. So, why not have a promotion, again, take a few games that might not be as well attended, and offer tickets in one or two sections for $4.55? It would be a nice gesture on the Indians' part and it would give people a chance to get to a game that might not otherwise.

The economy is still rough and while $10 for a ticket seems inexpensive to me, there are families that still can't swing that.

This is a tricky proposition. You never want to devalue your product, but people need a taste to see what they are missing. Give away more tickets, for less desirable games, in less desirable sections to various non-profits or volunteer organizations.

Concerts and minor league ball parks have been doing this forever. The idea is the seat would have otherwise been empty, so why not fill it. If a person received the ticket for free, they might be more inclined to buy a hot dog, soda, and maybe a t shirt. Sales that the Tribe would have missed.

Posted by Cleveland Chick at 11:58 PM