Finally, after weeks of anticipation, the Marines arrived in Cleveland for Marine Week. The city has been filled with artillery and displays from the Marine Corp.  My grandfather was a Marine and so was my favorite uncle, so they hold a special place in my heart, and let's face it, they are Marines.

The week had something for everyone with an airshow, which was amazing, that included a storming of the beach. Sadly, we watched from across the highway, but it was still amazing. When some of the jets buzzed by, all I could think of was Maverick being denied his request to buzz the tower. I now know why. The planes rattled my fillings out as they buzzed by.

While I was truly impressed by the tanks and trucks and large guns, I was most impressed with the Marines themselves. There were a few peaceniks that were trying to razz the Marines and they just smiled and went on with their business.

The most stunning sight was the Wall. Even though it was a small portion, the hardcore bikers in tears as they made impressions of the names of their fallen buddies was enough to make me sniffle. 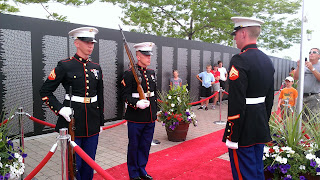 Minutes before I took this photo, these Marines were laughing, chugging red bull and taking pictures with kids, teen girls and old men. When it came time to be all business, they were. If you have never seen the precision of the Marine Honor Guard, I suggest you check it out. As the man on guard walked by, you could see the sweat dripping down his face. He never flinched, there was never a hitch in his step as people snapped his picture. 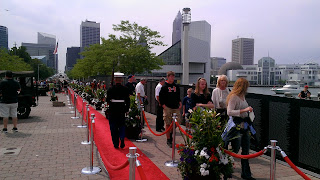 Even as he was told his watch was soon over, he never stopped, never nodded in agreement that he understood. He just kept walking. 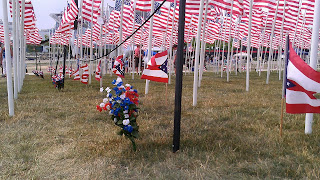 If the Wall didn't make me emotional enough, climbing up to see all of the flags of the soldiers that have been killed, some with pictures attached, did it. Needless to say, I hopped back down pretty quickly. My dad stuck around a bit and talked to the vets, but I had to move on.


On our way out, we snagged our shirts as we headed to the Tribe game. I think my dad said it best, "If those are the young men guarding our country, I fell damn safe."
Posted by Cleveland Chick at 7:52 PM