4,200 fans were ready for some Browns football on Sunday, with a record breaking turnout for training camp. Spirits and expectations were high on a beautiful sunny day.

We arrived about half an hour after camp opened because my dad just had to get an egg mcmuffin, and it was packed. I don't think it would be possible to stuff many more people in.
The camp was loaded with fans, all jockeying for position against a thin rope holding everyone back. I personally saw my opportunity when a guy walked away to take a call. Move your feet lose your spot.  My view would have been perfect were it not for radio host Kenny Roda, who I like to refer to as Pork Pie, in honor of his funny little hat.

Most of the media, Tony Grossi, Mary Cabot, Craig from WFNY, all kneeled so fans could see the field. Pork Pie did not at any time. Fans would beg him to move and he would sway his head one way or another so they could get a shot. In all honesty, I had no idea who the guy was until a fan squished next to me mentioned it. He also said that Roda is a Steelers fan, which resulted in me calling him Pork Pie all the louder.

In the defense of the media, I know they are there to do a job, but a little consideration goes a long way. And it might keep you from earning a nickname from me. 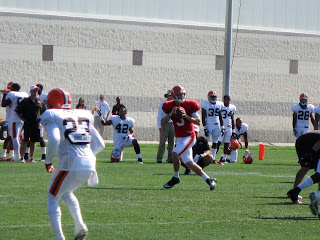 Brandon Weedon looked strong. He was making the majority of his passes and taking most of the reps. He looked like he had the starting job...and was fine with it. 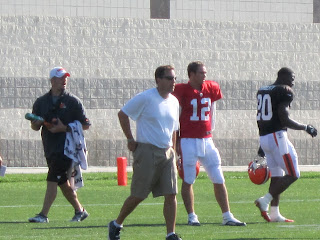 Colt McCoy on the other hand seemed to be on the outside looking in. I honestly believe he thinks he can still win the quarterback job. The kid has heart, that much I will give him. After practice, he was one of the last guys on the field, getting some extra work in. I could almost hear him saying, "Put me in Coach!" 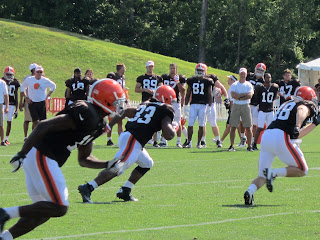 Fans were most excited to see Trent Richardson. The guy looked in shape and ready to go. No saggy pooch like Asdrubral showed up to Indians Spring Training wearing. TRich is built like a tank. 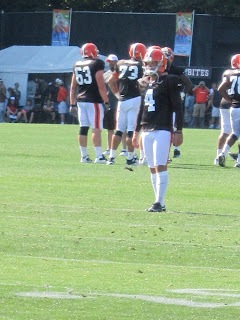 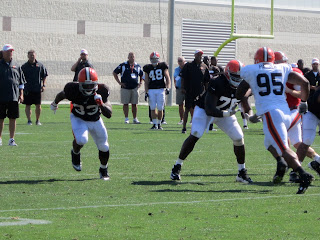 The team looked good. I know, I know, it is just training camp, but I have high hopes for this year. Granted, I did last year too, but this year is different. I just know it. 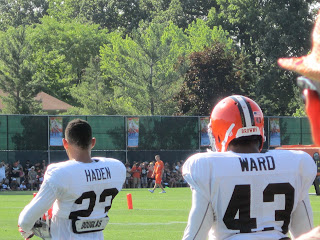 From what I saw, Joe Haden is going to have a great year. I love his excitement about the game of football. 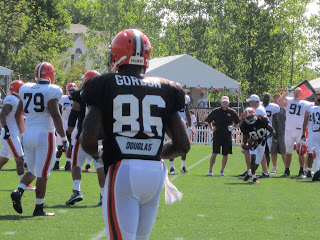 There was a lot of talk about Gordon. 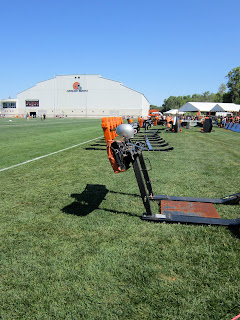 I don't know why, but a lot of fans were complaining that there was a Buckeye's helmet on the tackling rig. It was just silver. No Buckeye. 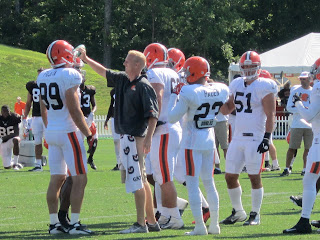 I was surprised to see Fujita. For some reason I thought he was in NFL jail somewhere. The guy is huge. 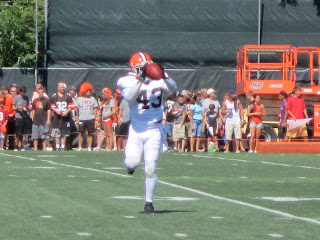 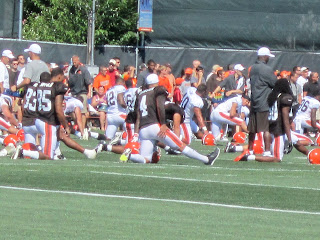 What better way to end the day than Phil Dawson?
Posted by Cleveland Chick at 12:46 PM