LeBron Still Doesn't Get It 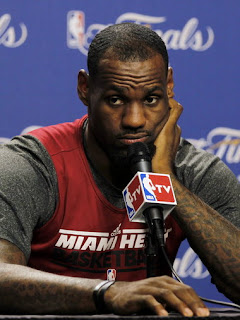 With his enormous wealth and the resources of the world at his fingertips, LeBron James still doesn't get it. When he left Cleveland, he set himself up as the villain. He tried to play the poor me card, seemingly unaware why fans all over the country turned on him.

Overnight, he went from beloved star of battle scarred Cleveland to the hated ring chaser of South Beach.  There would be moments of calm with misplaced comments about "getting where the fans are coming from" which gave way to explosions of jabs and punches attacking the fans and their little lives.

For as much as Cleveland is blasted in the media for not moving on, neither has LeBron. His fragile ego is crushed every time Chad Zumock cracks jokes about him. Over and over he has been given chances to make everything right with Cleveland. The number of fans that would clamour for him to return if he only would have thanked them for their support with a ring on his finger makes me nauseous to consider.

After LeFoolio's disastrous spectacle to announce where his talents were going, Dan Gilbert wrote a letter to Cleveland fans. It was harsh and stinging and perfect. Gilbert told fans that they "didn't deserve this kind of cowardly betrayal." He's right. We didn't.

Now - buckle up buttercups - now, LeFoolio is going to Aunt Oprah crying that Gilbert's letter was hurtful. I'm sure that it wasn't as hurtful as the kick to the cookies he gave to Cleveland, but whatever.

LeFoolio goes on to paint himself as a hard working guy that wanted nothing more than to bring a championship to the city of Cleveland. I wonder if Oprah asked him about is elbow. I mean such an awful injury that forced him to shoot left handed and stand in the corner. That right there is a story, I mean, whew, his career could have been over there. Maybe she will ask him about quitting during game 5. Probably not, but a girl can dream.

LeBron likes to play the victim. Running to the recess monitor about the bad, bad bullies picking on him. Can't you picture it - crocodile tears in his eyes, his voice quivering as he cries by the merry go round?

Let it go LeBron. We all make decisions in our little lives, decisions that have consequences that we deal with.

Maybe it is time for a Dr. Phil intervention or something...someone has to help this kid out. 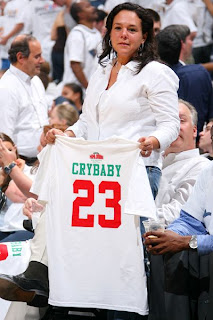 Posted by Cleveland Chick at 1:12 PM