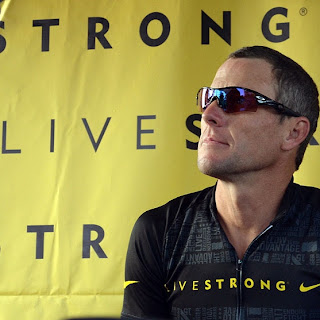 The man that beat testicular cancer, started a foundation that has raised over $500 million to fight cancer, won 7 Tour de France races and was clean for 560 random drug tests throughout his career gave up.

Armstrong announced that he would no longer fight the USA Anti-Doping Agency and its allegations that he used performance enhancing drugs in his career. By giving up the fight, he was stripped of his 7 Tour de France titles.

But what does it mean? Well, first, it means that I go back to not caring about cycling and being irritated when it is on instead of curling tryouts. Second, it means that there will forever be an asterisk by his name, a foot note explaining he won - but his title was removed for doping allegations. He will be in the same record books as Barry Bonds and the rest of the steroid accused sluggers.

By giving up the fight, he is allowing rumors to grow and swirl that he is guilty - that somehow he beat the system and was afraid he couldn't run anymore. Or, by giving up the fight he is saying you have accused me for years and chased me down over 500 times for random drug tests all over the world, at all hours, and I was always innocent and I am done with you.

Because Armstrong stopped fighting and didn't have his last day in court, there will always be lingering doubt of his innocence. Whispers that if he wasn't guilty why didn't he fight more. 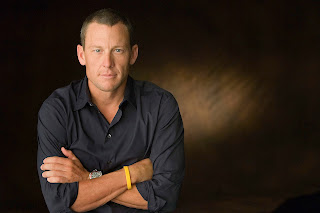 But does it matter? Lance Armstrong more than a guy who is awesome riding a bike. On an average day, his foundation, Livestrong, receives a little over $3,000 in donations. Nothing to sneeze at. On the day Armstrong announced he was done fighting, the foundation received about $80,000. No, I didn't get excited with additional zeros there. Almost $80,000 came flooding in the Livestrong doors in response to his statement.

I don't know what I would do in his situation. Spending countless hours and millions of dollars defending myself might be enough to make me say forget it. Armstrong has never wavered in his declarations of innocence. Sheryl Crow spoke out years ago about the drug test folks showing up at all hours during vacations, trying to catch Armstrong in a moment of weakness. I hate the fact that he will always be questioned.

While sports purists were up in arms, there were millions of people that could have cared less. They see Armstrong and his yellow rubber wristband as a beacon of hope. They see him as their big brother in their very personal fight against cancer.

Whether or not Armstrong cheated is something we will never know for certain. I'm sad that we don't have proof of his innocence, but I would be much more upset with proof of his guilt.

Posted by Cleveland Chick at 9:02 PM