Time For Chris Perez To Be A Pro Or Go

The time for Chris Perez to be a professional or get out is now. Speaking for myself, he needs to get a severe attitude adjustment or take his talents elsewhere.

In case you missed it, Chris Perez has had some public relations issues lately. Previously, Perez took to twitter and the air waves to blast fans for not coming to games. Fair enough. Things took an ugly turn when he attacked Browns fans. He wondered aloud how Cleveland could be so hungry for a championship yet support the "Waiting For Next Year" Browns. As you can imagine, that did not sit well with fans, certainly it didn't sit well in my already nauseous tummy (read my take here).

In Perez's defense, he decided to get involved in the community and the fans by giving away random pairs of tickets to home games if someone on twitter can answer some random question, like what was his favorite song in the third grade.

What happened last night has put Perez in a whole new realm of angry, pathetic behavior. You can read the transcript and see the video here, but in short, a fan heckles Perez hardcore and Perez comes over to the fence running his mouth. Perez drops several f bombs and then instructs the fan to do something that I believe is anatomically impossible.

My stance is Perez is a professional and while uncalled for, he needs to deal with heckling. Fans booing him and screaming at him is part of being a professional athlete. As he is fond of pointing out, he makes the big bucks. The more I watch him, the more I think he has some sort of misguided notion that by sheer virtue of him being an All-Star, he should be revered.

There are those in the media that are making excuses for Perez - that he finally snapped. What would you do if someone was screaming at you at work they wondered? Well, glad you asked. I will tell you.

As a bartender at major concerts, Final Four, NBA and NFL games and at the Brickyard 400, you name it, I've seen it. I've been a booze slinger at weddings and gobs of special events, witnessing the best and worst of humanity. Part of my job was to cut people off and let me be the first to inform you, most people aren't too excited about the drinky poos drying up. I have been called everything but the name my parent's gave me. I have been screamed at, sworn at, threatened and even had nachos chucked at me. Drunks have questioned my intelligence, my heritage and even my ability to get a date. Some nights, in that exact order.

What did I do? I smiled and moved on to the next person.

I turned around and walked away. Maybe I muttered, but I walked away. And I never, *never* cussed a guest out.

Was I furious at times? Absofrigginlutely.

But, I liked my job and I knew that some drunk chucklehead wasn't worth me getting canned over.  I know that isn't $4.5 million a year decision, but not bad for 6 bucks an hour.

Perez needs to grow up and start taking his job seriously.  When he goes out on to the field, he represents the Indians and the city of Cleveland.

For crying out loud, how about next time going over to Indians fans to sign autographs instead of focusing on fighting the opposing fans?

Be a pro or just go. 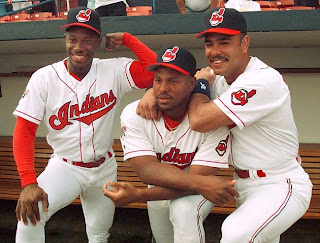 Posted by Cleveland Chick at 9:11 PM