In my ongoing quest to point out all things awesome, in no particular order, #85 is Cleveland Browns fans. As a true Browns fan, you know that with the exception of very few, you don't just become a Browns fan. Little boys and little girls in Dallas don't wake up one morning and pronounce their love of Cleveland.

No friends, being a Browns fan is passed down like grandma's crochet blanket. Moms and dads pass the passion for the team and the hatred of John Elway down through the generations. The fans now don't know the thrill of the Kardiac Kids, and the heartbreak of "the drive." 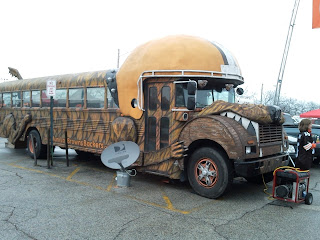 Browns fans show up each season proclaiming that *this* will be the year. Every year.

Every Sunday, fans pack the Cleveland Municipal Lot and lots all over town, with their decked out vehicles. Retrofitted school buses, bread trucks or campers are Browns ready. For those away from home, all over the country, fans mosey up to bars and pubs begging for their game to be on.

In Indianapolis, I went to Scotty's Brewhouse downtown. It was one of the few joints I could go into and they would have the game on, without sneers or grumbles. There were a few other fans that would show up each week, we would exchange knowing glances, like we were part of some elite club.

Browns fans are dedicated and ever patient and while we haven't won a championship since 1964, we are ready, because maybe, just maybe this is our year. 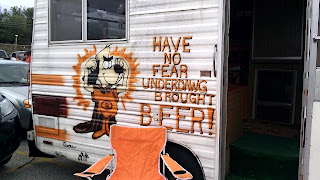 Posted by Cleveland Chick at 7:54 PM