Today was one of those days that I ambled around town until something fun jumped out at me. That fun was going to the Horseshoe Casino in downtown Cleveland with my aunt. After an hour or so of her winning and me losing all my money, we took the casino up on their offer of a free buffet after playing for 30 minutes or more.

I was going to grab a salad and maybe some cheesecake, but when we got up to the buffet, it was closed. There was about an hour and half to wait until it opened and there was already a line forming. We gave each other the "thanks, but no" glance and went to the food court.

The casino gives you a day or so to use your vouchers, so we opted to try Rosie & Rocco's, the joint owned by Cleveland chef Rocco Whalen. I have been to Fahrenheit and had an enjoyable if not *expensive* meal, so I had high hopes for Rosie & Rocco's. 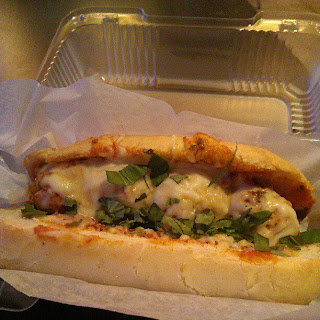 The $15 voucher from the casino and .75 nabbed me a meatball sub, doughnut doughballs (more on those later) and an iced tea. Let's start with the meatball sub. The meatballs were, I believe his mom's recipe, and since my mom doesn't cook but my grandma did, I'll say that if I made them and put my grandma's name on them, she would have whacked me in the back of the head repeatedly until I removed her name.

The meatballs on my sandwich were smaller than those made by Subway. The bun was ginormous compared to the meatballs, which made it all the more depressing of a sandwich. You could have used one side of the bun and cut that in half and it would have been the right size. I tried to over look everything looking forward to the mozzarella I was promised stuffed in the meatballs. Once again, I was disappointed.

As I mentioned before, I have been to Fahrenheit so I know Rocco can cook, so I am going to assume that his staff at the casino is not following his recipes. There was no mozzarella anywhere to be found inside my meatballs. I know this because I looked. They were flavorless and crumbly. I ate two of the meatballs, ignoring the bread, until I finally gave up and went for the fried doughballs. 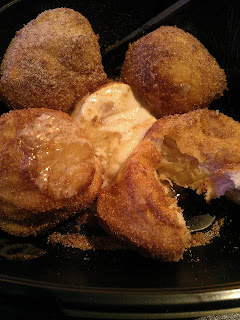 The fried doughnuts were actually doughballs rolled in cinnamon and sugar with a glob of marscarpone, that at first glance, I thought was a quarter stick of butter. The inside of the doughballs gave me flashbacks of episodes of Top Chef or Chopped, where I imagined the dough being hurriedly stretched and rolled in the back - then plopped on my plate. The doughnuts were not fluffy but just...well...doughy.

Looking for positives, the marscarpone was tasty, and the iced tea was cold. The staff was friendly, but it just didn't make up for terrible food. Getting pizza from a mall Sbarro would have been better quality than Rosie and Rocco's.

My aunt and I tossed well over half of our food and headed back into the casino. We didn't bother going back to the counter because quite frankly I doubt that anything else they would have produced would have been better.

Posted by Cleveland Chick at 7:22 PM