An Open Letter To Jimmy Haslam 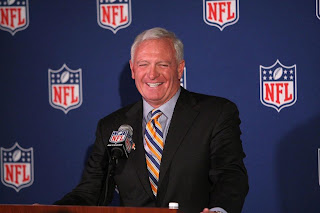 Cleveland sports fans are like a family. As with any family, we have our moments. We have that uncle that isn't allowed to drink at Thanksgiving anymore (such as the young man that dunked his head in unmentionables for $450), the crazy cousin that chases cars barking down the street (most of the dawg pound), sometimes we throw things when upset (we are the reason no one gets the bottle at games anymore) and we also have the wise elders that remember what it was like to actually *win.*

I don't know if you have noticed it yet, but the city has not had a winning team in a very, very long time. We cling to any morsel or fragment of winning like the last drop of stadium mustard. We have had so much in the sports misery column that the networks have been kind enough to create a Cleveland sports fail reel. Don't bring this up to Clevelanders though, we all know it exists, but we don't talk about it, maybe it will go away.

On that same note, you may have heard about some troubles we had with a certain member of the Cleveland Cavaliers leaving for sunny South Beach. The only thing I have to say about that is what most Clevelanders will say, it isn't so much as he left, as the manner in which he did so. Mention his name very carefully, as you will get a chorus of boos and grumbles, whether you are in a sports bar or a business meeting. No one likes a quitter.

There are a few other important things to know about Cleveland that I would like to share with you.

1.  We love Bernie Kosar. He hasn't worn a Browns uniform since 1993, but there are pets all over the city of Cleveland named in his honor. My cat included. Bernie Kosar and Jim Brown, as kooky as he may be, are the closest we have to football icons in the city. Did I mention we love Bernie Kosar? Because seriously, we do.

2.  Always watch the weather with Dick Goddard. The man has a weather phone to the heavens. His name is also associated with rescuing animals and woolly bear caterpillars, so go with it.

3.  Drew Carey is a favorite son. Take a picture with him and people will go crazy. He was much funnier in his show than on the Price is Right. But we will never begrudge his success. We are also insanely proud of Michael Symon. Watch the spirit he has when he talks about some favorite treat from Cleveland on one of his many Food Network appearances. We all feel that way and get giddy when we see him talk like one of us.

4. We hold grudges. Best to not mention any previous Browns owners. And I really can't emphasis enough how much fans dislike that guy that took his talents to South Beach. Not proud of this one, but it is true. Love hard, lose hard.

5. Cleveland is the rock and roll capital of the world. We will tell everyone that will listen. We also wear our pride for the rock hall and all things Cleveland on our t-shirts. From the CLE Clothing Company to GV Artwork and Design to the Fresh Brewed Tees boys, we proudly support our city through our love of tshirts and rock and roll.

6. Bob Feller was an Indians icon. His statue is in front of the Jake. The Jacobs sold and the rights and it is now Progressive Field. People still call it the Jake, so I don't know how effective of a purchase it was for Progressive.

7.  The only way to eat a hot dog is with stadium mustard. Either Bertmans or the stand by, Stadium Mustard will work, but if you like yellow mustard on a hot dog, only do so in private. Trust me, you don't want to be answering questions about mustard for the next year.

8.  All of our sports fails were given names.  The Drive. The Fumble. The Shot. The Decision. Never give any play or game a name. It never turns out well.

9.  Whether you are at a backyard picnic or a major sporting event and Hang On Sloopy comes on you must yell, " O  H  I  O" while making the letters YMCA style. It is similar to "Rocky Top" for UT games. If you want to win points with the fans and to have everyone collectively lose their marbles, I suggest trying it. Not only is it fun, but it may wipe away some of the bad karma from that team to the east.

10.  We take our teams so seriously, because for many, it is a part of us. I remember begging my parents for a Cleveland Browns Kardiac Kid t shirt with my elementary school's name on the back. I can't tell you the advance on my allowance that took. I remember crying when Ernest Byner dropped that ball. So do many other people. People plan their weddings and family events around Browns games. Just something to keep in mind.

Mr. Haslam, I look forward to running into you at Heinen's or maybe at a Browns game. I will be the one in a Phil Dawson jersey. Maybe if you have time, I can treat you to lunch to say on the behalf of Clevelanders near and far,  thank you and once again, welcome to Cleveland.

Posted by Cleveland Chick at 10:30 AM