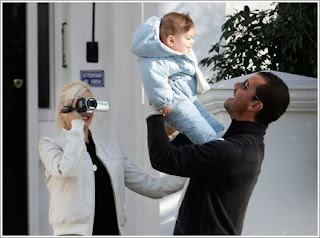 Digging through some of my old pictures, I found this gem from several years ago... 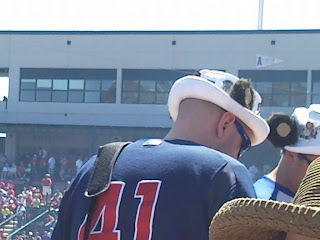 In case you are wondering, yes, those are grown men with little bear cub ears on.

Going to Arizona for Spring Training is a nice relaxing trip. Tickets are easy to come by, the vendors and ushers are friendly, the sun is shining, it is an all around good time. Unless you are getting Chicago Cubs tickets.

While most for most teams you can just walk up and get tickets minutes before the game starts, if you try the same for a Cubs game, you will be getting them from a scalper. Each park tries to adopt a bit of the local flavor of the "home" team. Goodyear, the home of the Indians has stadium mustard. Yum. The White Sox park has Chicago dogs, celery salt and all.

Since I heard so much hub bub about the Cubs games, I tried to get a ticket and ended up getting a $6 standing room only ticket for $20 from a giant monster of a man that only grunted and nodded to his translating minions.

Once inside the Mesa ballpark, it was like a miniature Wrigley Field, ivy not included. Cubs fans were *everywhere.* Red Hots and Old Style were on the menu for the day. I have no idea who the Cubs played or if they even won (I'm thinking not) but it was a great time. Wall to wall people, all happily barking at each other with their lovingly worn and threadbare Cubs tshirts or like this group of guys, homemade Cubs hats.

Photo Fun is an ongoing feature where I dig up some old picture out of my photobucket and share it with the world.
Posted by Cleveland Chick at 3:00 PM