There Is Still Time For Pumpkins

Now that the storms have blown Halloween trick or treaters to the weekend, you still have time to carve a pumpkin for your front porch. An added incentive is that the pumpkins are all marked down and you have a great family event. Admit it, boggle was getting old.

The first thing you need is a design. The Cleveland Indians were having a contest on Instagram for the best tribe pumpkin and I decided to give it a try. I downloaded a black and white Bob Feller patch to work off of. I printed one off that was about the size I wanted for my pumpkin. Big design = big pumpkin.

I stopped off at Marc's to get some pumpkin gutting tools. 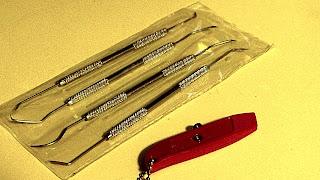 For under a buck, they had these lock picking dental looking tools and a little exacto knife. I also spent a whopping .59 on a turkey foil pan to dump all the pumpkin guts in to.

I cleared off a spot on the table and spread out a garbage bag to work on. Pumpkins can get a little messy. 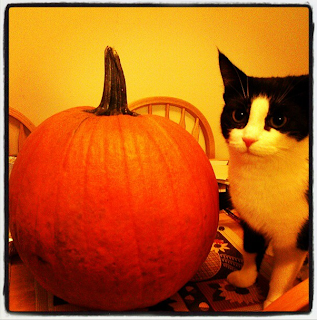 I don't have any shots of getting the pumpkin ready because of my adorable cat Bernie who was constantly in the way. First step was to take the pumpkin guts out, which I will not lie, was gross. I cut through the top and with a metal spoon, scooped it all out and dumped it in my .59 turkey pan.


Next, I pinned my Bob Feller design in place on the pumpkin. Eye it like a tattoo, to ensure it is in the right spot. Then, I took the dental pick things I bought at Marc's (you could also use a nail or a push pin) and poked through the paper to make an impression of the design on the pumpkin. Don't be slow with this step because the moisture from the pumpkin comes through and makes the design icky.

After poking enough holes in the pumpkin to give an outline for your design, take off the paper and start carving away. I used a grapefruit knife (.97 at Marc's) to start carving the design. 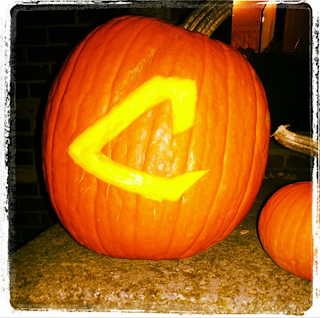 You can do what you want, but I did *not* cut all the way through the pumpkin. I just carved away on the outside until it looked good and then took a teaspoon and smoothed out the design. If you put a candle inside, it looks like you cut away the design, without the trauma of worrying that you cut away too much and the thing is a goner. 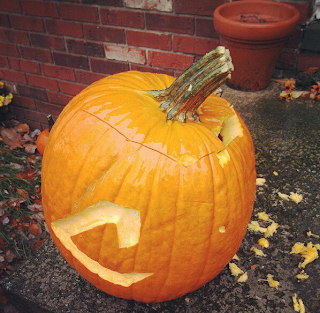 One word of warning. I forgot to take my "C" pumpkin in and it got chomped my squirrels. I have since moved the pumpkins into the garage until it is time for all the trick or treaters to ohh and ahhh over my pumpkins.

111 days until pitchers and catchers report...

Posted by Cleveland Chick at 5:30 PM