Mark Shapiro and The Fans

Some people in life wish they had a rewind button to fix what they blurted out, I think Indians' Mark Shapiro would like a copy/cut/paste button.

In an interview that has now gone viral, Mark Shapiro was asked by a Tribe fan why he should renew his season tickets.  And this is where the cut and paste comes in - Shapiro bluntly stated that if your sole reason for going to Indians games is to see the Tribe win, "Don't come."

I see where he is going with the statement, but as a fan, I don't want that to be the first statement out of his mouth. We are in a different time. Kids don't play catch until dusk in the front yard anymore because they are too busy in the basement playing Halo. Fans in the stands are too busy instagramming their stadium mustard slathered hot dogs and tweeting their seats to watch the game. You rarely see someone in the stands recording each pitch with a tiny little pencil, why should you since there is an app for that. The guy listening to the radio in the bleachers, paying close attention to the field and Herb Score's play by play are long gone.


Shapiro was making a point. Indians games are about baseball - the love of the game. You should go to Indians games because it is about the sport, about the team. Sure, winning is important, but it isn't everything. 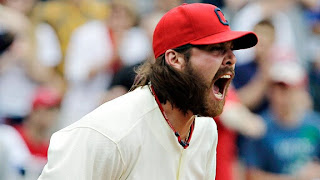 Somehow, I feel Chris Perez is somewhere warm and cozy, gloating. And that my friends, sends pure rage through my veins. I have been an Indians fan and going to games longer than Chris Perez has been alive. Think about that for a second. Running up and down the aisles of the old ballpark was how I spent my childhood.

To have a player like Perez or a front office guy like Shapiro dare question my integrity as a fan and my love for the game is frustrating. To imply that if you only want to see a winning team you are a bandwagon fan, is both offensive and ignorant.

Indians fans, like fans of every other Cleveland sport, are surrounded by sports inflicted misery. We still go to games and root for our teams - our losing teams - because we are fans. I don't think it is too much to expect that the Indians and Staff want to win as much as I want them to.

I love the atmosphere of a baseball game. Hot dogs, cold beer, friends, sunshine, hot dog races - all as a backdrop to the main event - Indians baseball. I can't think of a better way to spend a summer night.

If Shapiro wants to turn Progressive Field into an outdoor bar and kiddie park with a little something called baseball rumbling in the background like white noise, that is his prerogative. But, if that is his intention, he is going to lose even the most loyal fans. He needs to keep the old fans engaged while searching out and entertaining the new fans. I understand the monstrosity of that task, but that is why he makes the big bucks.

Shapiro and the like need to stop alienating the fans already in the house in an effort to grab the brass ring known as twitter nation.
Posted by Cleveland Chick at 11:00 AM