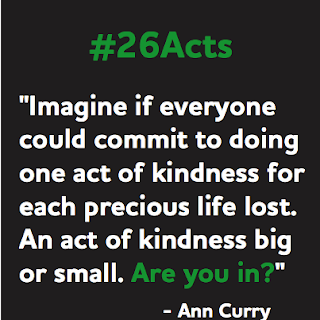 Whenever something awful happens in the world, there is a feeling that the evil must be offset. That for every terrible act, an act of kindness can help diminish the strength of the horrible. TV anchor Ann Curry suggested that everyone commits to doing one act of kindness for each of the innocent lives lost in the Sandy Hook shooting.

It is an amazing idea that I was sadly oblivious to until one of my blogging friends posted about it. She had a fantastic proposal - using the power of social media, her plan was simple. Since many people were off of work on Friday, take lunch to a local fire house to thank the first responders. I was immediately on board. Let's face it, these brave men and women are running to the very danger that I would run screeching and arms flailing from. By the end of the day, 50 firehouses received breakfast or lunch with a simple note - Thank you.

I am incredibly fortunate to have a great group of coworkers who pitched in and we delivered lunch to a fire house in East Cleveland. When we rang the door bell and announced that we had lunch for them all the men were adorably thankful, albeit confused. We didn't go with cameras or tshirts with our company logo. We didn't leave a stack of brochures or business cards. We dropped off the full lunch of salad, cookies, candy and pasta and said thank you. It was easy to see that this group doesn't receive thank yous very often because they kept asking why we were there and where we were from.

It felt great to just say thank you with no strings.

The acts of kindess spread through the day and weekend. That night, I was offered a pair of Cavs tickets with the stipulation that I do something nice for someone else - buy a kid a hot dog. 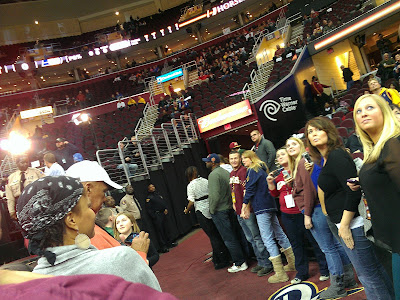 I scurried home to get my pop to take him to the game and we made our way to *amazing* seats. I asked and was allowed to stand in the high five line as the Cavs came out of the tunnel. It was awesome, I won't lie.

When I went to the concession stand with my dad I saw a father and son next to us and I offered to buy their dogs, pretzel and sodas. If you ever want to participate in a social experiment, try to buy something for a stranger. It was hard enough explaining to my dad about the tickets and then me buying a stranger hot dogs. After the man was sure that he wasn't being filmed for some reality show and there was no motive other than I was trying to pay it forward, he reluctantly agreed to let me pay the bill.

It still felt great if for no other reason than the dad explaining the story to his friends. 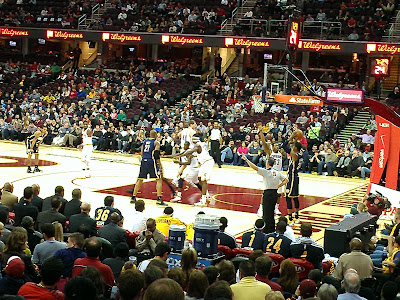 On Saturday, the warm fuzzies continued. Shopping at the mall, it was great to see people sharing coupons that they weren't using giving other shoppers discounts. I had a teen girl quietly come up to me, calling me Ma'am (ouchie) and offered me a coupon for my purchase at Bath and Body Works.

If you haven't done it lately, give it a try. Feed a parking meter. Buy someone a coffee. Hold a door open. Clean the snow off the car next to yours.

It doesn't take any more energy to be nice. See what happens, you might be surprised.

Posted by Cleveland Chick at 2:19 PM