An Open Letter To Jimmy Haslam - Let's Talk About Phil

I hope that you and your family are settling in well and enjoying your new Cleveland home. I know you are extremely busy with the season coming to an end Sunday against the evil team to the east, so I appreciate your time.

Let me be the first to thank you, and I think I can speak for most Clevelanders on this point, thank you for going to games. Thank you for being fired up after a bad play. Trust me when I say to you, we feel you. Thank you for being visible. Browns fans aren't used to actually seeing the team owner around, so if any of us say something awkward, please be forgiving. Don't be afraid to keep showing your emotions. Cavalier's owner Dan Gilbert does the same thing and we love him for it.

I trust that you found my first letter helpful and you are getting comfortable navigating Cleveland and its inhabitants. I'm sure you or someone on your staff has turned on sports talk radio or read any of the hundreds of newspaper or blog articles and you probably noticed - Browns fans are nervous about impending changes. Please don't take the angry, nervous paranoia personal, you have to understand that we have seen changes since 1999. Change hasn't quite worked out in our favor yet, but I am eternally hopeful.

I appreciate that you are trying to make the Cleveland Browns a relevant team again and eventually a contender. The NFL Road Tested show on the Travel Channel is a perfect example of my point of making the team relevant. People outside of the city of Cleveland are aware of the Browns, which is a nice feeling. I have enjoyed the opportunity to see the inner workings of the team and to see a personal side to the players, especially kicker Phil Dawson. 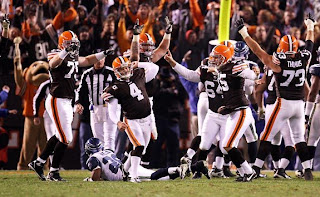 Since we are talking about him, Phil Dawson is  one of my favorite Browns players. He is a clutch player and his consistency is staggering. Since 1999, the Browns have not had to concern themselves with nervous hand-wringing on the sidelines whenever it was time for an extra point or field goal. As a Browns fan, that is one thing to be thankful for. I'm sure the long trail of coaches would agree.

Over the last 15 years or so, while not living in Cleveland, I have watched Browns games in the corners of tiny sports bars in several states, Tennessee included. Many times I was the only person watching the Browns game and if I had a nickel for every time someone asked me why I was a Browns fan I would have season tickets by now. So, imagine the pride I felt in 2007, sitting at an establishment in Indianapolis, when every NFL game switched to the end of the Browns vs. Ravens and all eyes were on Phil Dawson. Phil kicked a 51 yard field goal in the closing seconds of the fourth quarter. I had people patting me on the back and buying me drinkings after that kick.

I'm sure you are already aware, but Phil Dawson is one of the most accurate kickers in the history of the NFL. He is the only remaining player from the Browns reboot in 1999. Dawson is first on the Browns' list of all-time field goals made. He ranks second in Browns' history with career points. He is fifth in the history of the franchise in the number of games played. Dawson holds the Browns' single season record with 30 field goals made in 2008. And for the love of Cleveland, the man scored all 15 points in the game against San Diego this season.

Mr. Haslam, I understand that re-signing Phil Dawson to a one year deal will come at a cost in the neighborhood of $15 million.

Sir, I am aware that is not going to happen. But I implore you to come to a longer term deal with Dawson, and keep him on the team. Make sure he retires as a member of the Browns.

I promise you, if Phil Dawson leaves Cleveland, we will immediately see the error of that decision when the game is on the line and another kicker tries to kick 50 yards into the harsh weather whipping off Lake Erie. 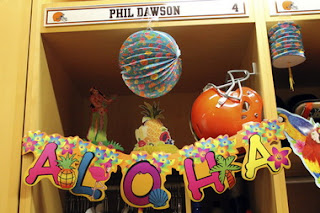 Dawson finally made it to the Pro Bowl this year, and he did so with the support of his teammates  and the fans. When was the last time you heard of players wanting to decorate another player's locker or fan campaigns...for a kicker? Dawson received the second highest amount of votes for a kicker, which for his first time even being in the fan voting contention, isn't too bad. 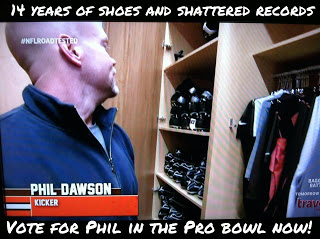 As a fan, I want to see Dawson break Lou Groza's record and become the team's all-time leading scorer.   I want that emotional moment on the field when it is announced.

I don't mean to be pushy, truly I don't, but I am going to go so far as to say Browns fans deserve it. After all the disastrous years of watching a crummy product on the field, of losing game after game, season after season, I want to be proud of my team again.

We all know that Dawson will eventually retire as one of the top kickers in NFL history. Since 1999, he has stuck with the team and the fans - all while I'm sure people were telling him to take his talents elsewhere. I, for one, am thankful he didn't. Dawson has been nothing but a respected professional.

I am suggesting that you and Joe Banner make a bold move.  Do something out of the ordinary and show loyalty to not only Phil Dawson but to the fans of Cleveland. We deserve something to cheer for and someone to be proud of.

Thank you for your time sir, and go Browns!