Why Phil Dawson Is Awesome

I've been a sports fan for as long as I can remember. My first celebrity crushes were Dan Fouts and Joe Charboneau. As much as I loved watching Bingo Smith and Mark Price of the Cavs growing up and the Indians bats of the 90s, I have always loved football.

Maybe it was because my first crush in elementary school would try to woo me by drawing a perfect San Diego Chargers helmet or finding a plastic Steelers helmet from the gumball machine that we could crush in the playground, that made me a football fan. Maybe it was sitting in our living room plopped on a bean bag chair watching games with my dad. Whatever the reason, I have always loved football.

In elementary school, we had the Kardiac Kids shirts with our school name on the back that I saved my allowance for. I loved that damn thing. But, I never got to go to an actual Browns game at the stadium as a kid. Indians games for sure, but never a football game.

Flash forward to adulthood and I'm still a Browns fan, still a football fan. Now though, I'm not only a fan of the game, but players as well. There are many players on courts and fields that could care less about the fans. They ignore kids for autographs or fight with fans for not buying enough of their jerseys. Some of these guys think that the admiration and good will from the fans will go on forever, regardless of their behavior.  I get it, football is a macho game with bravado and swagger. But there is room for good guys. The players that acknowledge the fans and their support. The guys that are grateful to be a part of the game and a part of our lives.

Whether it is a guy like Bernie Kosar laughing thankfully about pets all over Cleveland named after him (my little Bernie included) or Phil Dawson tweeting a fan like me for my support throughout a difficult season, there are still good guys in sports.

And that my friends, is a good thing to see on a Monday. 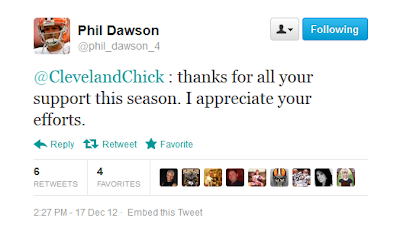 Posted by Cleveland Chick at 4:48 PM