Oh Zippy, how we have failed you.

Today, it was promoted that at an upcoming Akron Zips game there will be a LeBron James bobblehead giveaway. Let me be the first to tell you, I am not thrilled.

Before I go into why I am less than exstatic over this promotion, let me share a little with you. Any regular readers or followers will know that I am not a fan of LeFoolio. I find him to be a selfish quitter that gave up on the city of Cleveland. Not only did he give up on Cleveland, but he giggled with glee as he skipped across the playground to play with his little friends in Mihammy. I make my feelings pretty clear about it here, so let's move on to the other nugget...I am a Zip.

I spent my undergraduate days at the University of Akron. I worked hard, got scholarships and paid for the rest of my education. I *earned* my degree at UA, and I'm proud to call myself an alum.

Part of what has me so fired up over this promotion is not only that they are doing it, but the fact that LeFoolio is wearing an Akron uniform. 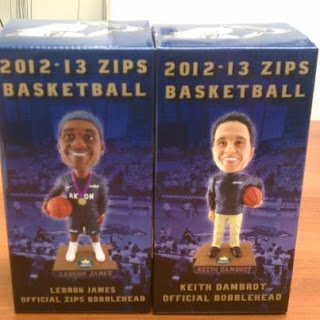 I have been going back and forth with the Facebook and Twitter faces of the Zips and they have been doing their best to defend themselves with all the good that LeFoolio does in Akron. One guy accused me of not being informed.  They responded to every positive post in the bunker mentality of no one understands LeBron like Akron does. He does sooooooooooo much.

Let's be clear, if LeFoolio has finally found the philanthropic spirit, God bless. Good for him, because he certainly didn't have it in Cleveland.  The list is endless of kids he stood up and events he blew off when he was with the Cavs. He seems to actually want to help kids stay in school now, so good for him. But don't for a second tell me what a great guy he is. I'll believe that when you can find a bartender in the city of Cleveland that can vouch he gave a good tip...if left one at all.

Back to the uni. When I barked about LeFoolio wearing a Zips uniform I was told it is because he is a supporter of the basketball program. That friends, offends me. It smacks against every man and woman that worked to earn the right to be on a Zip team.  Another way to look at it is to imagine he had never been a part of the gold medal olympic team. But...let's say he supported his NBA friends in their quest for the gold and let's even say he was generous with his financial resources.

Because he is a "supporter" of the olympic team, he is forever bobbled with a gold medal around his neck.  Isn't that offensive to anyone that put in the work and made the sacrifices to to be an athlete?

I hope he finally does get it. I hope that he truly becomes a philanthropic force in the sports world.

Until then, not on my bobblehead. 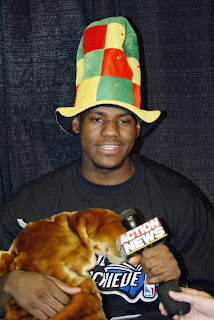 Posted by Cleveland Chick at 9:17 PM