How is that for a headline?

This past week, a baker that was featured on TLC's Next Great Baker closed her shop in Vermont, claiming that her business to a nose dive after she appeared on the show. She went on to complain that the network portrayed her in a negative light and her reputation was shot to all heck.

As Heather B. from The Real World New York pointed out years ago, all the editing in the world can't create create a character out of nothing. The editors can only work with what you give them.

The cranky cup cake creator was caught during the season cranking up the ovens of competitors and stealing sheet pans and the fans of the show took their displeasure out of her shop. Turns out people don't like cheaters. The shady baker made her situation worse when she gleefully told the home audience what she did, claiming all is fair in competition.

When the sugar hit the fan, customers walked right by her shop and into her competitors.

More than 20 years ago, a ground breaking show called The Real World pushed videos out of MTV's line up. The premise was 7 strangers moved in together and had their lives taped. It was a peek into 7 very different lives, and seemed very real. Now, well, now because of programs like the Real World, everyone on a reality program has a motive. There is no question if you have any desire for fame, reality tv is the way to go.

But my friends, reality tv is not for the faint of heart. If you are going to open your world to all of tv land in the hopes of fame and fortune, you have to take the good with the bad. There are days that each of us are doom and gloom instead of rainbows and kittens. Personally, I prefer to keep my crabby days to myself.

So while it is sad that someone lost their business and people lost their jobs in part because of a tv show, my faith in humanity is restored.

Nice to see a little karma in action. 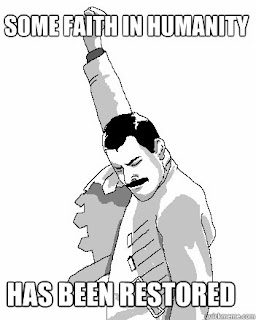 Posted by Cleveland Chick at 9:28 PM